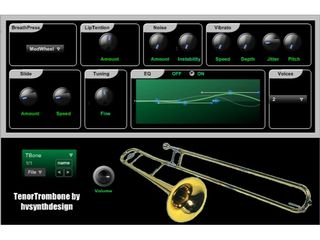 LowBrassCollection: enough parp for your pound?

You'll probably have guessed from the software's name that it uses acoustic modelling to create its sounds - there are no samples to be found here. Each instrument can play between one and four voices, and if you use a mod wheel or breath controller, you can create a virtual blowing effect that enables you to regulate the dynamics of your playing.

Predictably enough, HV Synth Design says that the sounds produced by Acoustic Modeled LowBrassCollection are very realistic, but it should be noted that other developers have made similar claims about their virtual brass instruments and these haven't quite lived up to expectations.

Unfortunately, there's no demo to try, though you can listen to audio examples on the HV Synth Design website. The full version costs $179 and runs on PC as a VST plug-in or standalone instrument.