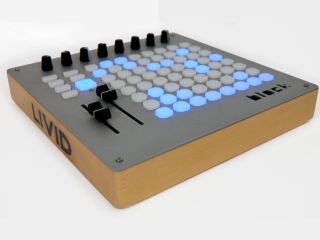 Livid Instruments' Block looks like a deluxe piece of hardware.

Livid Instruments' Block is the latest button-matrix-toting controller to arrive on the, err, block - it follows the company's Ohm64 into the market.

Given the timing of its release and the fact that it features an 8x8 grid of backlit buttons, the Block is bound to be compared to Novation's new Launchpad, but it differs from this device in several key respects.

For a start, it also features eight knobs and two faders (plus seven function buttons), and then there's the build quality. Block has an anodized aluminium faceplate and a case that's made from jelutong wood.

The controller can be programmed in any way you like - assignments can be made in the supplied BlockEditor software. This also features an LED pattern maker and custom LED patterns. It's also worth noting that the source code is open source and editable in Max/MSP.

Commenting on the launch of the Block, Livid Instruments founder Jay Smith said: "We wanted to make a compact and portable controller that could slip into a backpack and offer some of the same features of the Ohm64, so block was born.

"Block, as small as it is, has all the essential controls and is literally milled from a solid block of wood into a slim and compact controller."

The Block is designed to be used in any orientation you like and is USB-powered. It's plug 'n' play and will ship from 1 November. It costs $399.

For more, go to the Livid Instruments website or check out the videos below. The first gives a general overview of the Block and the second shows it controlling Ableton Live.