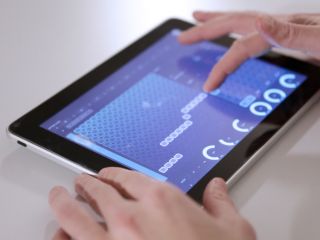 Lemur on an iPad: some thought it would never happen, but now it has.

JazzMutant's Lemur was the original multitouch controller, but was discontinued late last year in the face of much more affordable competition in the shape of apps for Apple's iPad.

But now it's back… in the form of an iPad app. It's hard not to dwell on the irony of this, particular when you consider that JazzMutant initially dismissed Apple's tablet as a serious rival.

The software comes courtesy of Liine, which is also responsible for the Griid Ableton Live controller app, and at £34.99, certainly sits at the top end of the market. However, if it offers anything near the level of flexibility of its hardware forebear - which, let's not forget, cost around €1700 - it could yet be a bit of a bargain.

It's also worth noting that, if you're a Lemur hardware owner, you're currently entitled to a 50% rebate on the app.

Details can be found in the press release below.

Lemur is the original multi-touch controller. Pioneering multi-touch control as long ago as 2004, Lemur completely revolutionised Music Production and Performance. No wonder, then, that you'll find Lemur in the studios of Daft Punk, Deadmau5, Richie Hawtin, Ryuichi Sakamoto, Björk…

Lemur turns your iPhone or iPad into the ultimate hands-on controller. Connect via Wi-Fi or USB MIDI and within seconds you're controlling multiple elements of your music environment with ease. Either use one of the many existing templates or create your own quickly and easily with the easy-to-use drag'n'drop editor.

Major stadium-touring acts use Lemur on stage. The original hardware version was introduced to the public in 2004 and Lemur software benefits from almost a decade of development. These are just two of the reasons Lemur is the name cited when talking about multi-touch control.

• Lemur can control anything

Lemur is a professional iOS controller app that doesn't cut any corners. It lets you control anything, any way you want. Total flexibility means it can go as deep as you need it to. Lemur can control DJ software, live electronic music performance software, studio production software (DAWs), VJ software, visual synthesis software, stage lighting and more. In fact, any software or hardware that can be controlled by MIDI or OSC can be controlled by Lemur.

Lemur has often been imitated but never equalled. The physics engine, which can make faders and balls bounce, is entirely unique: allowing anything from a slight organic feel to absolutely chaotic modulations. Lemur goes deep: it comes with more than twice as many unique objects as comparable apps. Options for adjusting the look and feel of objects are vast, and connection to your gear is simple.

Access templates from top artists and the Lemur community. Some of these are actual templates used on stage, others are pure studio or creative tools. Share your own or simply browse the library and download whatever suits your needs.

• All these major artists can't be wrong

Hated physics at school? Now you'll love it! The behaviour of many Lemur objects can be affected by powerful and easy to use physical models which can make your controller bounce, rebound and oscillate. Make your controller come alive.

There's absolutely no need to dive into scripting if you don't want to. But if you're the type who likes to get their hands dirty then there's a powerful scripting engine inside Lemur. Harnessing this power will allow you to build extremely dynamic templates.

The Lemur Editor is a cross-platform (OS X/Windows) interface builder. It allows you to create new Lemur templates or edit existing ones. The drag & drop interface makes it easy to use, allowing you to create templates for anything from the simplest set of faders to the most complex groovebox with no hassle.

Simply connect your iPad/iPhone to your laptop over Wi-Fi and make the connection! Lemur also supports USB MIDI, allowing you to use hardware interfaces such as Alesis' iO Dock, iConnect MIDI or any other class compliant device with the camera connection kit. You can even control up to 8 computers from one iPad with Lemur!