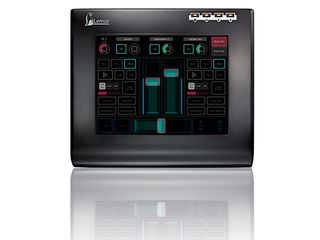 JazzMutant's Lemur: only a few more will be released into the wild.

We've just heard the sad but now wholly unsurprising news that JazzMutant is to stop selling its multitouch Lemur controller. In fact, Stantum, the parent company, is to end "JazzMutant activity" completely.

A statement on the JazzMutant website reads: "During five years and despite the new fever surrounding touch technologies, the Lemur remained the only multi-touch device capable to meet the needs of creative people. From now on, this ecosystem is evolving quickly : powerful consumer tablet devices are becoming mainstream, bringing the power of multi-touch to everyone.

"In the meantime, JazzMutant, renamed Stantum in 2007, has become a technology-centric company and developed partnerships with tier-one industrial partners to speed up this democratization. As a result, the need for a high-end dedicated hardware is doomed to vanish in the near future.

"This is why Stantum is announcing today that it will close its JazzMutant activity unit and stop selling its legendary Lemur multi-touch hardware controller at the end of December while the stock lasts! The last batch of Lemurs just came out of the factory."

The final Lemurs will be available at a 25% discount and come with the Dexter app - and a Lemur T-shirt - included. Technical support and after-sales service will end on 31 December 2011.

Reading this, many will conclude that the launch of the iPad and its many subsequent controller apps marked the beginning of the end for the Lemur, though when MusicRadar spoke to JazzMutant earlier this year, it remained bullish in the face of its Apple-produced rival, saying: "We believe that [the iPad] is not really the same kind of product. The Lemur is a device dedicated to music and visual control. The iPad, on the other hand, is a mainstream product, a 'jack-of-all-trades' that's not specifically tailored to musicians' needs."

This is true, but the fact remains that, for many musicians, the advantages of the Lemur in comparison to the iPad (resistive as opposed to capacitive touchscreen; advanced scripting possibilities) haven't been easy to grasp, and their conclusion has been that a £500 tablet that does a lot of stuff beats a £1,700 controller that they can only use for one thing.

JazzMutant, though, deserves a lot of credit for getting people talking about multitouch in the first place - it's worth noting that the reason a lot of producers were excited about the iPad is that they saw in it the opportunity to get Lemur-like performance. Its place in music technology history is assured.