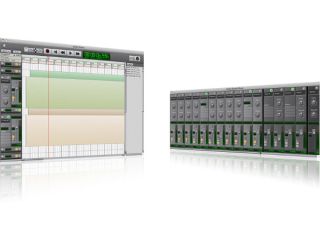 Koblo was a pioneer in the field of soft synthesis, releasing several products, including the acclaimed Vibra9000, around a decade ago.

We've heard nothing from the company for a long long time, but now it's returned (in a '2.0' guise, natch) with a new plug-in and plans to release an open source music making application.

It's the latter product that's got the most potential - known as Koblo Studio, it's a Windows, OS X and Linux-compatible program that's currently in alpha. It doesn't support VST or AU plug-ins yet, though this is on the roadmap, and other features are still to be added, too. However, even at this early stage the concept and design seem solid.

The new synth is a 2-oscillator affair called Centaurus. This features the filter from the Vibra9000 and is cross-platform. It runs standalone or as a VST/AU plug-in and costs just $7.49.