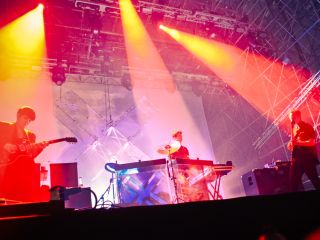 Jamie Smith - beak-maker for Mercury winning trio The xx, acclaimed remixer and producer, and current DJ-of-the-moment - has (indirectly) hinted at plans to design and create his own MPC-like instrument.

The Observer published an extensive interview with The xx ahead of the release of their new album, Coexist, later this month. In the closing paragraphs, the piece sums up the group's future plans, revealing: "Smith has plans to build a new instrument, like his beloved MPC sequencer but iPad-like and see-through, colourful graphics conjured with the same finger taps that make his music."

Is this something that's actually happening, or just a vague aspiration? Our guess is as good as yours. What would this see-through-but-colourful, graphic-y MPC-style iOS-alike look like? Submit your best guess drawn in crayon on the back of a postcard.