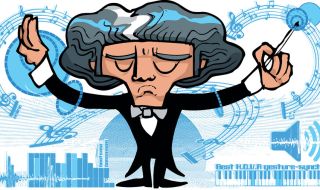 For the past few years, when the subject of next-gen control systems has been raised, the concept of touch - and, more specifically, multitouch - has dominated the conversation.

Just recently, however, another potentially game-changing control method has started getting some airtime. Gesture control shares some similarities with touch in that your movements (typically of the hands) cause changes to the settings in your software, but, unlike touch, no screen is required at all. Movements through the air are all that's needed - it's less about getting hands-on, and more about becoming hands-off.

Shape of things to come

iOS may be the platform that helped popularise multitouch technology, but IK Multimedia are seeking to take iMusicians beyond this and into the realms of gesture control with the iRing. At $25, it's eminently affordable, but what exactly does it do? We asked IK...

"Put simply, iRing is the first motion controller for iPhone, iPad and iPod touch music apps," say IK. "By wearing the supplied rings and moving them in front of the iOS device's camera, the user can control all kinds of performance aspects of their music, from triggering grooves to altering filter settings. The device's camera picks up the positioning of the ring patterns, and the apps convert that information into music commands, or MIDI information, which any compatible music app can read. A user can now operate up to six controllable music parameters in their preferred apps with one or two hand gestures."

This all sounds great in theory, but in practical terms, what does the iRing enable you to do that touch control doesn't?

"Everyone uses their hands as part of their interaction with other people, and gestural control can add an extra dimension to any music performance," claim IK. "For everyone - even those without any formal music training - this is a method of interacting with music apps in new and interesting ways."

It's perhaps slightly ironic that almost the same arguments were being made for touch technology not so long ago, but it is fair to say that, from a performance perspective, seeing someone move their hands through the air is a more appealing prospect than watching them tap away on an iPad. The concept of the one- man 'digital conductor' is one that we can definitely get onboard with.

Developing iRing wasn't without its challenges, however: "iRing works together with the iOS device's camera, and some external conditions - such as available lighting - could potentially affect the accuracy of the images needed for gestural control. Therefore, we have developed a highly optimised recognition algorithm which is built into our tailor-made iRing apps. A Software Development Kit will be made available to third-party developers shortly.

"Furthermore, we expect the quality of iOS devices' built-in cameras to get better and better with every new release, thus further enhancing capability and playability."

The notion of motion

As things stand, then, iRing feels like a blank canvas that's awaiting support from other app developers, and it remains to be seen if this will be forthcoming. It isn't the only gesture control platform making waves, however.

In the desktop domain, the $80 Leap Motion device - and its companion Airspace store, which enables you to download and buy apps that work with it - has been gaining traction. Using a combination of two cameras and three LEDs (all infrared), this USB device tracks your hand movements and translates them into data that can be used for all kinds of computing tasks. Its creators are keen to stress that it's designed to complement your existing input devices rather than replace them.

"The Leap Motion Controller works alongside your keyboard and mouse without any special adapters," says Michael Zagorsek, VP of Product Marketing at Leap Motion. "In creating Leap Motion, we wanted to enable people to do things on computers that they couldn't otherwise do."

So, what exactly are these things? And was music making seen as a potential application when the Leap Motion was conceived? "We had a strong feeling there would be a lot of innovation in the music space in particular," says Zagorsek.

"Music-making software can be complex, and the intricacies within each program can sometimes be difficult to learn. With Leap Motion and the family of Airpsace apps geared towards music, you have an intuitive, natural interface that anyone can use to create music in a new way. You feel more connected to the music through your movement, rather than just using a point-and-click interface.

"For example, with Leap Motion and the Geco MIDI app, musicians can control any variable using hand movements in the air. There are a number of other music creation apps in Airspace for more casual music creation, too."

A quick search on YouTube is enough to confirm that some musicians are indeed taking the combination of Leap Motion and Geco MIDI (which enables you to translate movements into MIDI data and then send this to music software) to their hearts, and it's worth noting that Steinberg have released a dedicated Leap Motion-compatible app, Cubase IC Air, that adds gesture control to their DAW.

Again, the key beneficiaries of this technology appear to be those who want to add a stronger performance aspect to their music making and feel more like they're 'playing' the technology rather than simply operating it.

Is it possible, though, that musicians will ever be able to rely exclusively on gesture control rather than seeing it as an optional extra?

"Right now we're just scratching the surface of what's possible," reckons Michael Zagorsek. "We've seen a lot of innovative uses of Leap Motion in the music space and beyond, and we are excited to see what developers and musicians alike come up with next. For example, we've been working with Grammy-nominated musician BT on an app called Muse, and jazz innovator Herbie Hancock is using Leap Motion to create sounds with just the wave of his hand."

IK Multimedia, too, believe that this is just the start of the relationship between gesture control and music makers: "Other platforms will certainly follow in future. Gesture control is a powerful, complementary addition to the repertoire of any artist, and who knows where the technology will take us one day?"

As things stand, gesture control won't be for everyone, and even those who do use it will do so in combination with other technologies. However, trends change quickly, so is it the case that gesture control will boom for a while and then fall out of favour? Not according to Michael Zagorsek:

"We think that gesture and motion control are here to stay. We don't see the Leap Motion Controller as a replacement to existing technologies; it's an augmentation. And, on top of that, technology like Leap Motion is helping to democratise the creation of music by making it easier for anyone to give it a try."