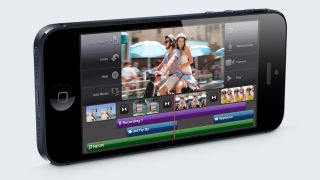 iPhone 5: fawn or yawn - the decision is yours. (Image credit: Image courtesy of Apple)

The launch of a new iPhone now makes it onto the mainstream news agenda, so you probably know by now that Apple previewed its fifth generation model last night.

Faster, thinner and lighter, it almost goes without saying that Apple is pitching the iPhone 5 as a massive step forward, but how will its launch affect the ever-expanding iOS music making market?

First up, developers will have to optimise their apps for the new 4-inch display. Until then, software will be letterboxed, meaning that the extra screen real estate won't be used.

It remains to be seen how long it will take for all the major music making apps to become iPhone 5 friendly, but we anticipate that most developers will decide to do what it takes to make it happen.

Of course, the iPhone 5 is more powerful than its predecessor, so you can expect better performance from your apps in the future. Whether we'll see more CPU-intensive music software that's designed to run exclusively on the new device remains to be seen.

One of the big changes on the iPhone 5 is the switch to the smaller 'Lightning' dock connector. This could cause a headache for manufacturers of the many iOS-friendly audio interfaces, keyboards and other music making peripherals that are currently on the market, as they won't connect directly to the iPhone 5.

A solution could be available in the form of the Lightning to 30-pin Adapter (sold separately, naturally), though we don't yet know whether this will support the use of add-ons such as those mentioned above.

Finally, we should mention that the iPhone 5 and new editions of the iPod touch and iPod nano will ship with Apple's EarPod headphones, which may or may not sound better than their decidedly lacklustre predecessors.

iPhone 5 will be available for pre-order from 14 September and will ship on 21 September. Prices for the unlocked models start at £529.