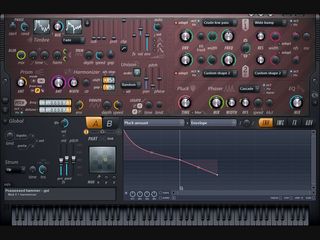 For Image-Line, it's Harmor time.

Just as we were hitting publish on our latest plug-in round-up, we got word that Image-Line has announced Harmor, a new synth for FL Studio and VST hosts. It was developed by Didier Dambrin, the inventor of FL Studio, and is the big brother of Harmless, an existing Image-Line synth.

Although Harmor is an additive instrument, it also emulates classic subtractive synthesis, and is even capable of image and audio resynthesis.

More details are in the official press release below and video above. Harmor is available now for Windows priced at $99. The price will rise to $149 on 1 October.

After a year in the making by Didier Dambrin, the inventor of FL Studio, we are proud to introduce our latest synthesizer Harmor.

Harmor features a unique and modern additive synthesis engine that emulates classic subtractive synthesis as well, taking sound generation to the next level.

Pricing: Introductory price $99 and will revert to $149 on October 1, after the sale. Get in quick!