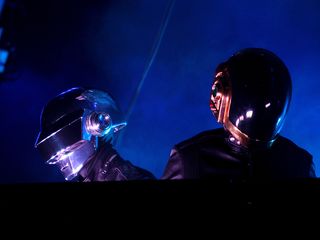 During an interview at the International Music Summit in Ibiza over the weekend, legendary disco producer Giorgio Moroder reportedly revealed the he has contributed to the forthcoming Daft Punk album.

However, it isn't his production skills that Moroder brought to the table - he was invited in to the vocal booth by the iconic house duo to recite his life story.

According to URB, Moroder found himself in the pair's studio surrounded by a collection of classic microphones dating from the '60s to the present day. When he asked the engineer why there were so many mics set up, Moroder was told that a different mic would be used depending on the decade of his life he was talking about. When he asked if anyone would be able to tell the difference, the engineer replied, "they will know."

It has already been revealed that Chic guitarist and all-round hit machine Nile Rodgers has collaborated on several tracks of the new Daft Punk record.