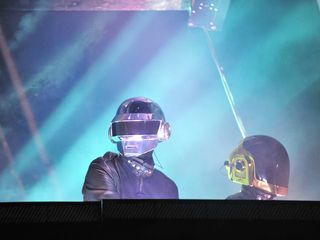 It sounds like a match made in disco/house heaven: Chic's Nile Rodgers has revealed that he's been making music with Daft Punk.

If reports are to be believed, the collaboration could lead to the release of an album. "We were just jamming at my house, but it's gonna be proper and real," Rodgers told Faster Louder yesterday.

"They came over to my [house] today around breakfast time and it's now evening. I basically had to almost kick them out. We were having so much fun just in an informal setting that we decided to make it formal. And it's very formal. It's gonna be amazing."

Rodgers went on to reveal more details about the creative process, noting that the fact that renowned disco samplers Daft Punk were now actually playing with a legend of the genre wasn't lost on Thomas Bangalter.

"Every track they played I just ran across the room and got my guitar and started playing and we were all dancing around my dining room having the time of our lives," he said. "It was something that was meant to be. It was interesting how Thomas said to me: 'It's funny Nile, it's like we've completed the circle'."