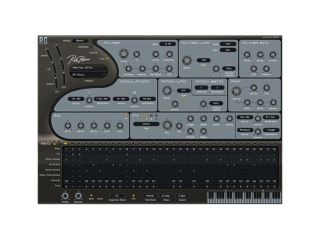 With the RG onboard sequencer, users can apparently create classic rhythm guitar grooves. Beyond that, players can utilize the synthesizer features and effects to make fresh new edgy guitar grooves. To play the rhythms, RG is using a keyboard layout of "major chords" and "minor chords," each with two sequence patterns. It is only a matter of hitting a single note in the major keyboard range or minor keyboard range and the groove plays. Sounds simple enough.

The sound sets are clean sampled guitars, which is to offer freedom and flexibility when using the synthesizer features and effects of RGGuitar types include:

The synthesizer parts of RG include a classic analog-modelled synthesizer filter, LFO, envelopes and modulation section. The effect section can be built up by using up to three effects at a time. Included are MIDI time-based delays, chorus and also speaker simulators, phaser, flanger, and many more. We're curious as to what "many more" means, so we might have to investigate further.

The Rob Papen RG is expected to be released sometime this spring. Pricing and formats have not been announced, but we assume in the latter case they're Windows and Mac OS X VST and AU. For more information, visit the official Rob Papen website.