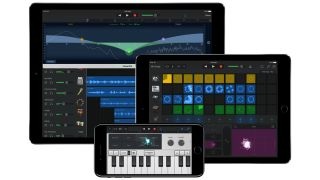 GarageBand for iOS now comes with a visual EQ.

After Apple acquired UK software developer Camel Audio, it wasn't long before the company's acclaimed Alchemy synth resurfaced in Logic Pro X 10.2, and now it's about to land on your iPhone and iPad as part of the GarageBand for iOS 2.2 update.

This isn't the first time we've seen Alchemy on an iOS device, of course - before Apple came calling, Camel Audio had Alchemy Mobile on its roster - but now it's available within GarageBand and has the look and feel of the app's other Touch Instruments. It comes with more than 150 "Apple-designed" presets, which promise to cover a wide range of stylistic bases.

With the number of Touch Instruments in GarageBand growing, Apple has also introduced a redesigned sound browser in version 2.2, with the aim of making it easier to explore what's on offer and find the sound you're looking for.

There are new recording options, too: Multi-Take Recording enables you to capture multiple passes, audition them and choose the best one (a feature that will be familiar to users of Apple's desktop DAWs) while the redesigned Audio Recorder includes both fun "one-tap" vocal effects and more serious tools that provide pitch correction, distortion and delay.

Speaking of 'serious', there's an expanded range of mixing effects, including a visual EQ. You can also bring third-party Audio Unit effect processors to the party.

The GarageBand for iOS 2.2 update is available on the Apple App Store, and is free for existing users. If you don't have GarageBand already, you can buy it for £3.99/$4.99.

If you're a Logic user, make sure you also check out the Logic Pro X 10.3 update, which has just been released as well.