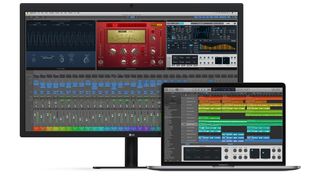 While many DAW developers like to unveil 'full' version updates on a regular basis, Apple prefers to give us a steady stream of point releases. Logic Pro X 10.1 and 10.2 were both significant revisions, and the same could be said of version 10.3, particularly if you own a Touch Bar-equipped MacBook Pro.

This comes with a tweaked GUI that's designed to look more contemporary and be more legible, while the Touch Bar can be used to navigate your project in a timeline overview. As in GarageBand, it gives you access to volume and Smart Controls, and you have the option to turn it into a musical keyboard (complete with various custom scale options) or a set of drum pads, too. The Touch Bar can also be customised to allow access to your favourite keyboard shortcuts.

Back in the software itself, Logic Pro X 10.3 includes Track Alternatives - you can now create and switch between different playlists of regions and edits on any track. The idea is that this will make it easier to experiment with different ideas or to chart the evolution of a track.

There's also Selection-based Processing, which can can be used to apply plugin effects processing to any selected audio region, or to multiple regions. There could be creative benefits here, though this additional flexibility could come in handy when you're mixing, too.

On a more technical level, there's now a 64-bit summing engine and the number of available busses has risen by 192. True stereo panning, meanwhile, gives you discrete control of stereo signals.

Finally, Apple is giving Logic Pro X 10.3 users an easy way of working on their projects in GarageBand for iOS (version 2.2 of which has just been announced) when they're on the move. You can now save a bounced-down GarageBand-compatible version to the iCloud, and then add additional tracks on your iPhone or iPad. Once the resulting project is saved back to the iCloud, these parts will appear in the main Logic project on the Mac, so that they can be worked on further.

The Logic Pro X 10.3 update is free for existing users and should be available imminently from the Mac App Store. The price for new customers is £150/$199. We'll be getting hands-on with the update and reporting back very soon...