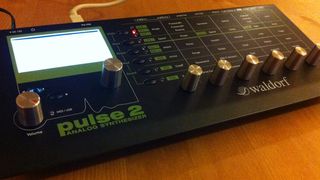 German synth maker Waldorf first unveiled the Pulse 2 - an unexpected, although not unwelcome successor to its mid-'90s Pulse monosynth - over 18 months ago, back at NAMM 2012.

Following its first unveiling, the Pulse 2 sort of dropped off our radar. In the intervening months its existence was somewhat eclipsed by several other impressive releases from Waldorf - namely its excellent compact analogue synth Rocket, and its impressive debut iOS instrument Nave. So it was something of a pleasant surprise when, last month, Waldorf announced that the synth was finally shipping.

So what is the Pulse 2? In a nutshell, it's a desktop analogue synth - bigger and more capable than the Rocket yet still compact (being sans-keyboard) and, at a street price of roughly £410/$610, still relatively affordable. As with its '90s ancestor it packs three oscillators, a noise generator, a multi-mode filter, filter and amp envelopes and an arpeggiator.

Pulse 2 adds a handful of more up-to-date features into the mix too, such as a USB connection for transferring MIDI info, a backlit LED screen, an 8-slot modulation matrix, a pair of overdrive circuits and additional filter modes. The Pulse 2's third oscillator is also capable of FM and ring modulation effects, and there are Paraphonic and Unison modes (the latter of which was one of our favourite features of the Rocket) for layering up voices. All in all, it's pretty well equipped for the price.

Let's get the negatives out of the way first: we can't say we're huge fans of how the Pulse 2 looks. Its design is reminiscent of Waldorf's Blofeld wavetable synth - a rectangular unit with a screen and master controls to the left, and a grid of controls options to the right - yet with the same black and green colour scheme as the Rocket.

While it's just a matter of personal taste, to us the design looks more reminiscent of something Buck Rogers might use to do his tax return rather than a source of warm analogue synth tones.

That is, however, where our criticisms of the Pulse 2 end: in use it's an impressively powerful and great sounding instrument. The three-oscillator synth engine is capable of producing a huge range of sounds, - from grizzly basses to thick leads, vintage pads and FX, and more - and this is made plain by the huge onboard preset bank, which comes packed with 500 very usable sounds.

And while the design might not be to our taste, the build quality certainly seems impressive; Pulse 2 comes in a sturdy metal case, and features robust-feeling controls and a bright, easy-to-read screen.

Our favourite aspect of the Pulse 2, however, is its instant usability. The grid-style layout of the synth engine controls is exceptionally easy to navigate, and the LED screen offers useful feedback on what's going on inside, meaning that building complex and unique patches is a wonderfully simple and quick process.

After unboxing the unit we plugged it straight into a computer (with no need to download drivers), opened up a MIDI channel in Ableton Live, loaded the synth's initialised patch and tweaked our way to a great lead sound in a mere matter of minutes.

We say that the Pulse 2 is a desktop synth and, given our initial test, that seems to be where it's best suited. Its lack of a built-in keyboard and the fact that almost all editable parameters share just five knobs means that it's probably not ideal for live performance, although the massive preset bank could be useful for those who need loads of pre-made sounds on tap.

It's certainly a versatile beast, though, capable of an array of great sounds, and it's exceptionally easy to navigate, all of which means we can see it being a great addition to any studio setup.

At this price point it seems like great value for money, too. It might not be much of a looker, but for fantastic analogue sounds, versatility and practicality, Pulse 2 is looking like a very smart investment.