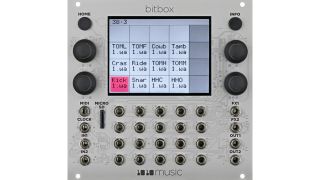 1010music has announced that it is shipping Bitbox, a brand new Eurorack sampler module with a touchscreen.

According to 1010music, Bitbox "delivers recording, clip launching, and looping in a musically intelligent way."

Alongside 24-bit/48kHz recording through a stereo input, the module also features a capacitive touchscreen that will enable you to browse and load sounds from the microSD slot.