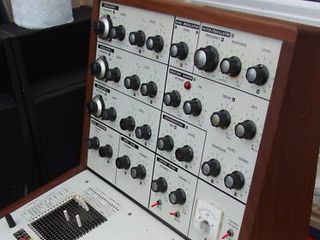 Does this synth have a place in Doctor Who history?

The theme music for Doctor Who is as iconic as the Daleks, the Cybermen and Tom Baker's dandy scarf, so it follows that when a synth that's alleged to have been used in the recording of it goes up for sale, it's going to attract a lot of interest.

Said synth is an EMS VCS3 (also known as the Putney) that was owned by John Baker, who worked at the BBC's Radiophonic Workshop from 1963 to 1974. It's up for sale on eBay, where the seller claims that it was "used in the early 1970s on the rework of the Doctor Who theme music, and lots of his [Baker's] other work".

He continues: "Cosmetically it looks in good condition, but has been unused since the late 1970s and been in dry storage since I acquired it from John's estate [Baker died in 1997]".

Some eBay users have questioned whether or not this synth was actually used on the remake of the original Doctor Who theme, but the seller seems convinced that this was the case, claiming to have received assurances from Daphne Walker, an acquaintance of Baker's.

Either way, the synth is certainly seen as valuable: the current bid stands at £3,877.