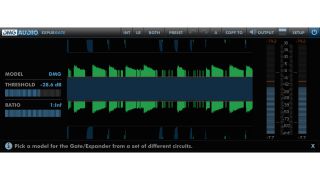 DMG Audio admits that gates aren't the most inspiring processors, but says that it's tried to make Expurgate - its new fully-featured gate/expander plugin - as exciting as possible.

It's done this by including a selection of favourite gate designs and a sidechain EQ with spectrum analyser. The interface has been streamlined to speed up the workflow, and CPU usage is said to have been kept as low as possible. On a basic level, you simply need to "set the threshold and Expurgate your noise".

Of course, if you want to delve a little deeper then the options to do so are here. In fact, DMG Audio reckons that Expurgate is "the most advanced noise-detecting, circuit-modelled, MIDI sample accurate, zero-latency, ultra-fast, lookahead, linear-phase sub-band gate" out there.

You can find out more on the DMG Audio website, where a demo can be downloaded and the plugin can be purchased at the discounted price of £90 (regular price is £100). It's available for 32/64-bit PC/Mac hosts in VST/AU/RTAS formats.