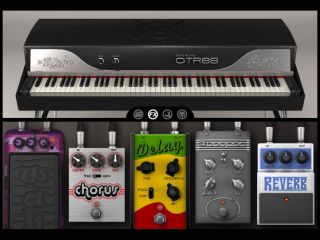 OTR88 supports 'under the hood' editing on a note-by-note basis.

While some software developers are saving their product announcements for next week's Musikmesse in Frankfurt, Devine Machine has jumped the gun and gone public with three new releases already.

Most interestingly, there's the OTR88, a synthesized (not sampled) electric piano that's gives you a staggering amount of control over the sound.

Each of the 88 keys has 17 editable parameters (including pickup position, tine harmonic content, tine decay, oldness, tuning and pan), and you can further modify your tone with eight virtual effects pedals (Chorus, Delay, Distortion, Flanger, Phaser, Reverb, Tremolo, and Wah).

Shipping with 100 piano presets and 80 global presets, OTR88 costs €229. It's cross-platform and runs standalone or as a VST/AU/RTAS plug-in.

Apparently, Herbie Hancock offered his advice during the early development stages, so our hopes for this one are high.

Devine Machine's other announcements are updates to existing plug-ins. The Krishna synth is now at version 1.5, which heralds the arrival of a completely rebuilt audio engine, while One Shot Recorder makes it to v2.0.

These cost €199 and €79 respectively, though existing users can update for free.