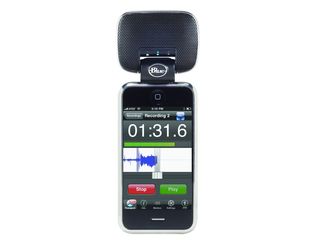 The new Mikey looks more 'rounded' than the first version.

The 2010 Winter NAMM show - the music instrument industry's big annual shindig - may not be happening until next week, but gadget fans will have their eyes on the 2010 Consumer Electronics Show (CES) from tomorrow.

It's not specifically a music event, but Blue Microphones has announced that it will be showing the second iteration of its Mikey iPhone/iPod microphone.

The company says that, like its predecessor, the new Mikey sports a pair of custom-tuned Blue capsules but adds that an improved acoustic circuit should allow for higher quality recordings of high-volume events (such as live gigs).

What's more, it has a 3.5mm line input that enables you to record your guitar (or other instrument), while the USB pass-thru connection means that you can charge and sync simultaneously.

An updated case design, meanwhile, means that the new Mikey should be compatible with the majority of iPod/iPhone cases while allowing a 230-degree range of adjustability.

To complement the new hardware, Blue has also revealed that it's released a free iPhone/iPod recording app, Blue FiRe, which is available now from the App Store.