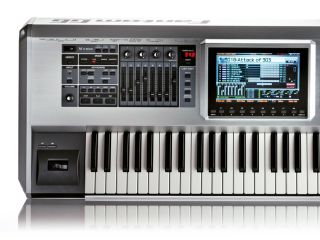 The Fantom-G6 can be used for playing and producing.

You´ll probably have noticed that we have a review of Roland´s Fantom-G6 on MusicRadar - the latest version of the company´s well-established synth workstation.

In the face of competition from computer-based setups, you might have thought that products such as this would have died a death by now - there´s no denying that you can achieve pretty much everything you can with a Fantom with a laptop and some choice bits of software - but there are several good reasons why workstations are still relevant.

For a start, there´s convenience. I love having a studio´s worth of gear inside my laptop, but it didn´t come fully formed. My computer and the applications/plug-ins that it runs all had to be sourced separately, and I´d be lying if I said I´d never had any compatibility problems. With a workstation, you know that everything will work right out of the box.

Usability is also an issue. Having a computer certainly gives you much more screen real estate to play with, but some users are still, understandably, a little scared of software. They don´t really understand it, and feel much more comfortable sitting in front of a keyboard-shaped production system (and in the case of the Fantom-G, one that can actually be navigated with a mouse).

But perhaps most importantly, there´s the immediacy of workstations. Today´s models might be packed with functionality, but one of their great assets is that they can also be turned on in a second and played, which puts them at a key advantage over computer-based systems.

I know from experience that, when your whole setup is built around a computer, it sometimes feels like a considerable effort to sit down, fire the machine up and boot your software if all you want to do is hammer away on a piano for a few minutes. If you´ve got a keyboard with built-in sounds, you´re much more likely to power it up on a whim.

So, if you´re a Mac- or PC-based producer who feels that they don´t need a hardware synth or workstation, I´d encourage you to think again. Sometimes, it´s better to leave the computer turned off and just play.