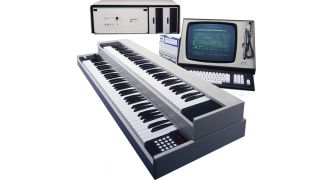 It's impossible to overstate the enormous impact of sampling on music, and hard to imagine a world without it. At the start of it all, there was the Fairlight CMI. The Fairlight wasn't the first device capable of recording and playing back a digital sample (Publison's popular DHM 89 B2 sampling delay processor hit the streets in 1978, with the Fairlight following in 1979), but it was the first to offer a polyphonic, keyboard-based interface.

In what has become something of a legendary tale, sampling was, in fact, only added to the Fairlight's repertoire at the last moment. Initially, it was intended as an eight-voice digital synth with customisable waveforms that could be drawn on a CRT screen with a futuristic-looking light-pen. Designed by Peter Vogel and Kim Ryrie, the Fairlight used digital technology licensed from Creative Strategies' Tony Furse, who'd spent years designing a digital synthesiser for the Canberra School of Music. Furse's synth was the Qasar M8, a massive, hand-wired black box measuring four feet across and a foot-and-a-half in height, and stuffed with 20 8"x8" circuit boards, plus a fan to keep its 64KB of RAM cool.

Though Fairlight was founded in 1975, it would take years for Ryrie and Vogel to get their "Computer Musical Instrument" to market. They'd already taken pre-orders before they realised that a last minute circuit re-jig would allow for rudimentary sampling. This in turn prompted a complete overhaul of the whole thing, this time focusing on the instrument's new 8-bit sampling capability.

The now-iconic multicomponent Fairlight CMI system finally saw the light of day at the end of 1979, just in time for the technology-obsessed 80s. It was the perfect match for the decade to come, with its sleek ivory cabinetry, rakishly-angled CRT terminal and the ever-present light-pen.

However, such bleeding-edge tech came at a cost. Fairlight systems started at $25,000 with some configurations costing as much as $175k! Needless to say, only hitmakers could afford the things, ensuring that the Fairlight's distinctive sound would be imprinted on the popular music of the day. Users such as Peter Gabriel, Kate Bush, Frankie Goes to Hollywood, Jan Hammer, The Cars, David Bowie and Herbie Hancock exploited the instrument's then-novel sampled sounds as well as its real-time 'Page R' sequencer.

The rest of us could only dream of sampling until the price came down, which it finally did thanks to other manufacturers, eager to capitalise on the Fairlight's Brave New Sound.

Today, most people carry more powerful computers in their pockets than the boys at Fairlight could ever have dreamed of - yet as we gaze out over our desktop DAW with its attached QWERTY keyboard and MIDI controller, we can't help but chuckle at its vague resemblance to the sampler that started it all.

Everything old is new again and you can, as it happens, buy an actual new Fairlight CMI from Peter Vogel's new company for the princely sum of just under £14,500. If you don't have that much lying around, though, you can grab this virtual version for iOS. It features a recreation of the Page R sequencer and the entire Fairlight CMI IIX sound library (over 500 "voices").

UVI have recreated the Fairlight as a software sampler for the modern desktop DAW, providing a whopping 2.34GB library of samples that can be played through one of three virtual instruments bearing the familiar Fairlight colour scheme. Synthesis and drum/phrase sequencing are included, as are modelled filters, LFOs, envelopes and effects.