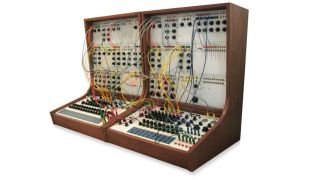 Music production has always been subject to rampant and righteous bouts of brand loyalty. Just as desktop musicians debate the merits of Reason vs FL Studio, analogue aficionados often argue over their chosen aesthetic, defined by the region from which two seminal synthesizers emerged.

Moog's modular systems were built in New York, on the East coast of America, while Don Buchla resided in northern California, on the West coast. To this day, synthesists describe traditional, toneful electronic music as 'East coast', whereas more experimental, aleatoric compositions are said to exhibit qualities of the 'West coast'.

While Moog's designs and nomenclature have become familiar to electronic musicians, Buchla's modules have names like 'Source of Uncertainty' (a random voltage generator) and 'Arbitrary Function Generator' (a combination of a sequencer, multisegment envelope and voltage processor). Many of these differences might seem like the reactions of a contrarian, but Buchla's first instrument was designed at the same time as - and independently from - Moog's. In fact, Buchla beat Moog to the sequencer, an inclusion that would become important to users of both systems.

Don Buchla began designing his first instrument in 1963 after being commissioned by Morton Subotnick and Ramon Sender, founders of the San Francisco Tape Music Center. The idea was to create an all-in-one, purpose-built electronic musical instrument that could replace the hodgepodge of laboratory oscillators, filters and modulators with which most electronic music was made up to that point.

Significantly, the instrument's 16-stage sequencer could be used in lieu of the then-traditional technique of recording individual tones to tape and cutting and splicing the recordings to create complete compositions. In addition to the sequencer, Buchla's first instrument offered analogue oscillators, a noise generator, ring modulator, reverb, voltage processors, envelope generators and gates (Buchla's answer to the VCA). As with Moog's synths, connections were made with patch leads. Rather than the traditional keyboard, a touch-plate was used to 'play' the patches. Buchla purposely steered clear of convention, convinced that new types of performance techniques would inspire new types of music.

He was right, too, and there's no better example of the 'Buchla sound' than Morton Subtonick's classic Silver Apples of the Moon. Released in 1967, it was the very first electronic music ever commissioned by a record label. Full of quixotic rhythmical bleeps, chirps and squalls, accompanied by distinctive percussive sequences, the work stands in stark contrast to the record that would make Moog a household name, Wendy Carlos' comparatively conventional Switched On Bach.

Buchla would continue to expand upon his designs, selling modular systems such as the 100 and 200 series, variations of which are still available today. Never as popular or industry-defining as Moog's instruments, Buchla's designs have nevertheless recently begun to be rediscovered by modern musicians, manufacturers and software developers alike.

Aalto was one of the first - and remains one of the best - soft synths to draw upon Buchla's legacy. Like many of Buchla's systems, Aalto offers a complex waveform generator, sequencer, and the low-pass
gate that was key to creating those famous percussive tones. Readers of Computer Music magazine get Aalto CM free in the CM Plugins suite.

Encoreaudio offer Buchla-inspired devices for use in Max For Live. This particular one models Buchla's 259 Complex Waveform Generator, but extras such as its envelope generator and filter provide Ableton Live users with a cheap 'n' cheerful taste of the Buchla sound. Nearly every parameter can be modulated and automated within Live.