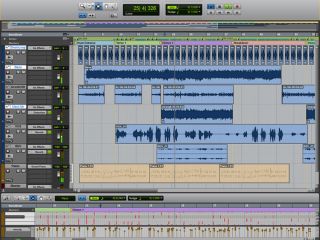 Avid has announced the Pro Tools SE Family: a new range of music production systems designed for newcomers to the world of computer recording.

Common to the whole product family is the Pro Tools SE software, the headline specs for which Avid says are as follows:

· Use more than 100 different virtual instruments and more than 3 GB of audio loops to quickly construct songs and ideas.

· View integrated, intuitive tutorials that make it easy to learn how to compose, record, edit and mix on the Pro Tools SE platform.

· Record two instruments at once, and take advantage of built-in composing features including MIDI sequencing and score editing, which provide professional-grade creative solutions to users of every ability level.

Looking at these, you'll see some limitations - only 24 tracks and a maximum of two recording simultaneously being the most obvious ones - but this is very much an entry-level version of Pro Tools, and you suspect that Avid is hoping that those who get a taste for it will eventually upgrade to the more capable Pro Tools M-Powered.

US prices for the Pro Tools SE bundles are $99.99 for Avid Vocal Studio, $119.99 for Avid Recording Studio and $129.99 for Avid KeyStudio. They'll be available in the States this month - UK pricing and availability is still to be confirmed.

Avid has also revealed that Pro Tools SE will now ship with M-Audio's MobilePre audio interface, while its MIDI controller keyboard line-up is being expanded with the launch of the Oxygen 88. This is an 88-note hammer action keyboard that also sports 32 assignable buttons, knobs and faders and support's M-Audio's DirectLink automatic mapping technology.