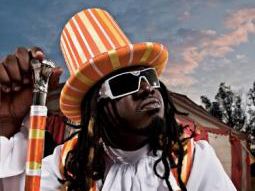 T-Pain: ready to put Auto-Tune on your mobile.

Antares' Auto-Tune plug-in has never been more popular, and the latest rumour is that we'll soon be seeing a version that runs on the iPhone/iPod touch platform.

One of the software's most prominent users is T-Pain, and he's revealed to Time magazine that the app is currently in development.

"It's gonna be real cool," he says. "Basically, you can add Auto-Tune to your voice and send it to your friends and put it on the web. You'll be able to sound just like me."

Whether this will be anything more than a novelty item remains to be seen, but if it is released, prepare to be on the receiving end of a slew of robotised voice messages.

Despite its ubiquity, T-Pain has also revealed that he has no plans to stop using Auto-Tune, and that the plug-in contains plenty of untapped potential.

"I know [Auto-Tune] better than anyone, and even I'm just figuring out all the ways you can use it to change the mood of a record."