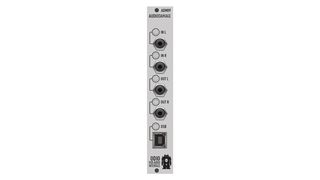 No drivers are required to use the Odio with iOS, Windows, OS X and Linux systems.

It's designed primarily for use with iOS devices, and for those who want to incorporate effect and instrument apps into their modular rig "for live performance or sketchpad recording". You might also consider using it with a Windows, Mac or Linux laptop, thus enabling you to incorporate plugin effects into your modular setup.

Specs are below, and more details are on the Audio Damage website. The Odio costs $249 and is available from selected retailers.