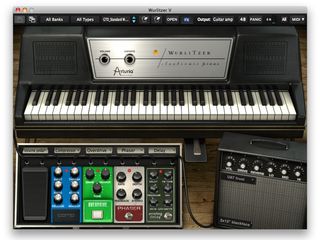 While the Fender Rhodes electric pianos can lay claim to being the most famous in history, many keyboard players cherish the slightly grittier sound of the Wurlitzer EP 200A just as dearly.

This long-standing love affair has now been recognised by Arturia, which has moved away from synth emulations to launch the Wurlitzer V, a physically modelled emulation of the 200A that works standalone and as a plug-in.

Offering you Studio, Stage and Rotary modes, the Wurlitzer V also comes with models of classic tube amps, mics and stompboxes, enabling your to tailor your sound within it.

Find out more on the Arturia website or in the press release below. Wurlitzer V costs €99 as a download and €119 in a box.

Think electric piano, and many musicians still think Wurlitzer or 'Wurly' -one of a series of electromechanical stringless pianos manufactured and marketed by the US-based Rudolph Wurlitzer Company, coining the trademarked Electronic Piano phrase in the process. The 1972-launched Wurlitzer EP 200A represented Wurlitzer's top-of-the-range, reed-based piano line throughout its impressive 10-year production lifespan; today Arturia's Wurlitzer V faithfully resurrects that still-sought-after sound - and more besides!

As most producers are already aware, the beloved bright and overdriven 'Wurly' sound so musically ingrained in popular music culture -thanks to artists as diverse as The Beatles, Supertramp, and Marvin Gaye -is actually a clever combination of admirable amplification -Fender Bassman and Twin Reverb guitar tube amps, et al; mic'ing par excellence; and precision processing, with multiple analogue chorus, phasing, and tape echo units often being used to fashion a deeper, luscious tone.

For anyone looking for an effective electric piano paired with stimulating studio tools (including extensive MIDI mapping of pedals, effects, and sound engine parameters), Wurlitzer V is the answer and you know that for sure!