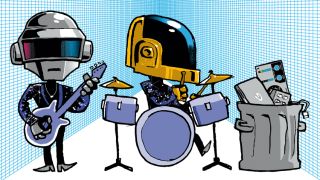 Should we look back to take music forward?

You've got to hand it to Guy-Manuel de Homem-Christo and Thomas Bangalter (AKA Daft Punk): they certainly know how to generate buzz.

The pre-release campaign for their new album Random Access Memories was brilliantly executed, with high-profile TV teaser spots for lead single Get Lucky being followed up with a big reveal via a video that was shown at the Coachella music festival.

This 90-second clip managed to upstage many of the acts that were actually performing, and further anticipation was built using YouTube interviews with some of the album's key collaborators.

The result was that the releases of Random Access Memories and Get Lucky felt like significant cultural events of the sort that the music industry generates all too rarely these days. But behind the hype lies the music, and this is where things start to get really interesting.

In an interview with Rolling Stone prior to their album's launch, Daft Punk went so far as to say that electronic music was suffering from an "identity crisis", with current releases being bereft of any kind of sonic signature.

The answer, as they saw it, was to do away with the "machines and samplers", and instead record real musicians playing real instruments. The fact that their new music has been met with both commercial and critical approval suggests that their approach has worked, but is this the start of a wider reaction to the heavily processed, intricately edited, sample-heavy sound of a lot of contemporary electronic music, or are Daft Punk fighting against the tide?

We spoke to producer, writer and remixer Jon Musgrave, who's currently writing and producing for Britain's Got Talent winner Jai McDowall and working on his own club project Bassfunk'd. Discussing Daft Punk's decision to go down a more 'human' route, he told us: "It's an interesting move, but these things tend to go in cycles. Daft Punk are renowned for heavily processing samples from other people's tracks, and that means a long process of sourcing and clearance. Anyone who is used to working in this way will find the immediacy of working with musicians very liberating."

This is certainly true - using a sample might feel like a quick fix early on but could turn into a real headache if your track ever becomes commercially successful - but the thrust of another of Daft Punk's arguments for using 'real' instruments seems to be that, if you're constantly trying to keep up with the latest cutting-edge sounds, your music will inevitably end up sounding of its time rather than timeless. We all know the names of the big plugin synths and effects that just about everyone seems to be using right now, but are you better off avoiding these in order to make your music stand out?

"Using a sample might feel like a quick fix early on but could turn into a real headache if your track ever becomes commercially successful."

"It's all about balance," says Jon Musgrave. "Over-reliance on the latest plugin, effect or sample set will certainly pigeonhole your sound, as it always has. But a bit like in fashion, certain instruments, effects and sounds become timeless while others don't. That's not limited to real instruments."

The fact that we talk about some synths and drum machines in reverential terms while others come and go bears this argument out, but - for better or worse - there is a sense that, by using live drums, vintage electric pianos and a wah-toting guitarist, you're somehow endowing your music with a greater level of 'authenticity'.

Although we frequently find ourselves refuting the argument that 'the computer can do it all for you', perhaps, on a subconscious level, we sometimes fear that this is true. Maybe it's not only the finished sound we're concerned with when we use real instruments and players, but also the credibility of the process.

"There is a sense that, by using live drums, vintage electric pianos and a wah-toting guitarist, you're somehow endowing your music with a greater level of 'authenticity'."

But let's not forget that it's not only synthetic sounds that can be created in software. In fact, there are many plugins that not only promise the sound of a drum kit, electric guitar or piano, but also give you a virtual player or ready-made parts, making virtuoso performances instantly available on a track in your DAW. Is it just possible, then, that you can actually generate the sound of a roomful of sessions musicians without looking beyond your computer?

"Yes, if you think and program like a player," reckons Jon Musgrave. "But that process can be very time consuming, especially if you want to include all the nuances. What you get with a recorded performance that you won't get from a software instrument is a sound that is totally unique. In a track with a few elements, that will be far more obvious than if the part is buried amongst many others."

Been there, done that?

For many, Daft Punk's decision to return to real instruments has felt like a breath of fresh air, but for some, there's a sense of amusement that they've managed to create the impression that the well-worn process of recording people playing things is somehow revolutionary. Let's not forget that, before computers, this is how all 'dance' music (ska, disco, etc) was made, and almost all rock bands still work in this way.

In fact, you might argue that there's a hint of The Emperor's New Clothes about all of this, and that the 'death' of the session musician was exaggerated in the first place.

Jon Musgrave, though, does believe that things have changed. "Music has a different landscape to how it was even ten years ago," he says. "Session players probably find more work playing live than recording, where virtual instruments have become a valid alternative. "However, the industry as a whole has contracted, and that stems from greater free 'on demand' access to services such as YouTube. In essence, the industry's financial turmoil has hit the jobbing musician, producer, artist and writer harder than anyone else."

The desire to 'do it all in a laptop', then, might not only stem from a desire to make a certain kind of electronic music, but also the financial realities of life. A lot of us turned to computer-based production because we would never otherwise have been able to create the complete, professional-sounding tracks that we dreamed of making. Hiring a studio and a group of session players would never have been an option - and it still isn't.

This being the case, it seems unlikely that Daft Punk's Random Access Memories is going to have anything like the same level of influence as their 2001 album Discovery did. A whole generation of computer musicians has spent a decade trying to emulate One More Time, but turning back time is probably beyond even the French duo's powers.

This article originally appeared in issue 193 of Computer Music magazine.