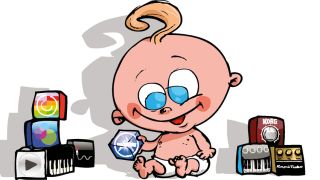 Would you give your iPad to this little guy?

It's now been almost four and a half years since Apple launched the App Store and kick-started the whole iOS music-making movement.

It now contains complete music production environments and a whole host of innovative instruments and sound-making gizmos, but at the back of computer musicians' minds, there's one question that won't go away: are these apps really anything more than toys?

If you're an iOS refusenik, chances are that you've made up your mind already. You'll probably struggle to see the point in investing in sandboxed software applications that - seemingly - can't be used together in any meaningful way.

Many others, however, will have the occasional tinker with iOS apps, but will still be doing all of their 'serious' music-making on a Mac or PC. And there are plenty out there who make music just with an iPad, iPhone or iPod touch, probably never having touched a 'real' DAW in their lives.

So who's right, and if iOS music-making tools really are just playthings, what are the chances of them reaching maturity sometime soon?

As we've suggested, the biggest problem for iOS music-makers is that apps can't easily be used together. Yes, there are some workarounds - audio copying and pasting being the most obvious, and inter-app MIDI being another - but the bottom line is that, if you're using Apple's mobile platform, there's no way of plugging a synth app directly into a DAW app, for example.

Change has come, though, thanks to a new app known as Audiobus. Launched late last year, it's been a concept that many of us have struggled to grasp the workings of, so we asked developer Michael Tyson to explain its purpose. "Audiobus is to iOS apps what audio cables are to studio equipment - it lets you plug things together," he says.

"Audiobus gives you the ability to use all this stuff together, and do it live so you can hear the results immediately. You can record a track in a DAW, then record a new track while being able to hear and play along with the first track. You can use a live-looping app to loop a synth while being filtered through an effects modeller. In short, it takes a platform with a bunch of separate music apps and turns it into an integrated virtual studio."

Apps have to be updated to support Audiobus, but uptake among developers already seems to be swift.

But hang on - didn't Apple itself announce a similar-sounding feature known as Inter App Audio when it previewed iOS 6? What's going on with that?

"When Inter App Audio was spotted on that Apple keynote slide, we immediately contacted some people we knew who were attending, and they found some Apple engineers on our behalf and grilled them on it," says Tyson.

"None of the guys they spoke to knew anything about it - one engineer went so far as to wonder if it was 'something marketing cooked up'. The truth is, we just don't know, but it seems pretty unlikely, if it does exist, that even the Apple audio engineers have never heard of it."

Don't go holding your breath, then - it looks like Audiobus might have the playing field to itself, for a while at least. Does Tyson believe it could change the perception of iOS music-making, though?

"In a word, yes," he declares. "There are fantastic music-making apps for iOS - even the 'toys' can be pretty cool - but without an effective way to use them creatively, they can be seen as mere curiosities. I think Audiobus is going to open up the platform and let people use these apps as part of larger projects."

Having it both ways

It might be taking a while for iOS to be perceived as a serious music-making platform, but many well-established companies have been investing in development for it for a while. Korg, Steinberg, Propellerhead and Native Instruments have all released apps, for instance.

Another major audio player investing heavily in iOS is IK Multimedia, which has released both hardware add-ons and apps. Indeed, it's opening a new iOS peripheral manufacturing facility in Modena, where it's based.

"We immediately realised the great potential of this platform for musicians, and that's why we decided to develop for iOS," says company CEO and founder Enrico Iori. "We were fascinated by the possibilities that a multitouch interface offers to users and developers, as subsequently demonstrated by devices such as the iPad. Mobility and the ability to create music anywhere, not just in the studio, has always been a very important factor for musicians."

As a well-respected developer of PC and Mac audio plug-ins, though, how does IK respond to the accusation that iOS apps are just toys? "This is more or less the same comment people were making about using a computer for creating music back in the 90s, and yet today probably 99.99% of production is computer based," says Iori.

"The truth is that musicians have always used all instruments and tools at their disposal to create music, as long as these tools are inspirational, convenient and fun to use. Furthermore, platforms evolve rapidly and you can imagine what type of music creation tools you could have in your pocket five or ten years from now."

These are solid arguments, and Iori also has news for those who fear that companies who focus heavily on iOS are doing so at the expense of their PC and Mac software. "Developing for iOS has forced us to streamline our approach to features, usability and the user interface due to the restricted power that these devices offer and, in the case of the iPhone, the minimalist user interface space," he explains.

"Making iOS applications has helped us to re-focus on usability instead of features, and this will surely benefit the future development of Mac/PC software and plug-ins."

The ultimate point to ponder is whether, as mobile and desktop platforms share ideas back and forth, we'll eventually reach a point where they merge. We were intrigued to see a clip of Jordan Rudess, a long-time iOS evangelist, playing a version of his iPad/iPhone app MorphWiz on a multitouch-capable Windows 8 PC. So, will mobile and desktop OSes soon become unified, and will developers who embrace both platforms now win out in the long term?

"We may be wrong, but we do not see full convergence - in the near future at least," says Iori. "The platforms have different ways of usage, and forcing them to be the same would not benefit users. This process will happen gradually and, initially, some of the tools that have proven successful on one platform will migrate to others, as has already happened in the iOS and Mac App Stores.

"We do not think that companies have to embrace both platforms to prosper; rather they have to offer the right products for their platform of choice, whether that's desktop or mobile."

In other words, there's a place for both iOS and desktop apps. iPad and iPhone music making tools are getting better all the time, but the trick is to focus not on the features that they don't offer, but the ones that they do.

This article originally appeared in issue 186 of Computer Music magazine.