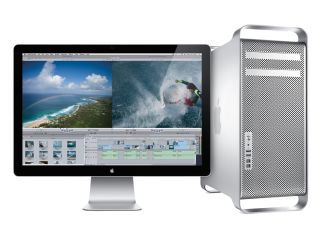 Quashing speculation that it would announce them on 24 March, Apple has today launched revised Mac mini, iMac and Mac Pro lines.

The new Mac mini is billed as 'faster and greener' than its predecessor. Inside, there's a 2GHz Intel Core 2 Duo processor, while up to 4GB of DDR3 1066MHz RAM and a 320GB Serial ATA hard drive can be installed.

Five USB 2.0 ports, one FireWire 800 port and a SuperDrive are included, too.

NVIDIA GeForce 9400M integrated graphics are also onboard, and the Mac mini can be hooked up to two displays (Apple or third-party) via its Mini DisplayPort and DVI connections.

Apple claims that the machine uses only 13 watts of power when idle, stating that this is around ten times less than a typical desktop PC.

On to the iMac, and perhaps the biggest news here is that you can now pick up the revised 24-inch model for the same price as the previous generation's 20-incher.

Finally, we come to the big daddy: the Mac Pro. This is now built around the Intel "Nehalem" Xeon processor, which can run at speeds of up to 2.93GHz.

Changes have also been made to the interior of the Mac Pro so that making hardware tweaks is now easier than before.

All the new Macs can be ordered now from your local Apple Store.