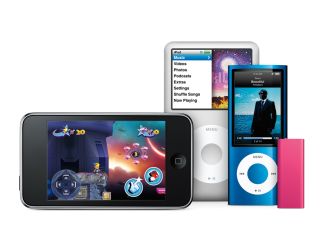 The new iPod family: take your pick from this lot. (Image credit: All images courtesy of Apple)

In the end, there was no Beatles announcement and nothing relating to The Rolling Stones, either: Apple's 'It's only rock and roll' event was all about a revised iPod line and a new version of iTunes.

Turning to the software first, iTunes 9 adds iTunes LP, which facilitates the bundling of 'extras' with albums on the iTunes Music Store (videos, lyrics, artwork, liner notes, photos and more).

There's also Home Sharing, which lets you transfer music, movies and TV shows between up to five authorised computers in your house; Genius Mixes (auto-creation of mixes made of up songs that 'go together'); and improved syncing with iPhone OS 3.1.

We won't go into any further details here - our sister site TechRadar has an iTunes 9 review, should you want to learn more - but we should say that if you want the software, you can download it for free right now from the Apple website.

On the iPod front, there's a new iPod nano with a video camera, a larger (2.2-inch) display, an FM radio and built-in pedometer. It's available in nine different colours.

The entry-level iPod touch, meanwhile, can now be purchased for £149/$199 (that's good news for anyone who was looking for a more affordable way of using the many great music-making apps on the market) while the iPod shuffle now comes in five colours and starts at £45/$59 for the 2GB version.

That's about it as far as new technology goes - in fact, this event was probably most noteworthy for being the one at which Apple boss Steve Jobs made his public re-emergence following a liver transplant earlier this year. It's good to see him back.