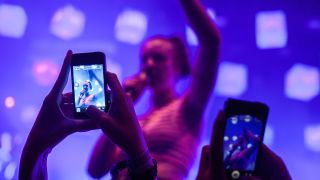 At least do it in landscape... (Image credit: Martin Faelt / PYMCA /REX/Shutterstock)

We've never quite understood why some people choose to go to gigs and watch them through their smartphone screens - doesn't that sort of negate the point of actually being there? - but it's certainly a massive thing these days. If Apple has its way, though, it might not be a thing for too much longer.

9to5Mac reports that, in 2011, the company applied for a patent for technology that would enable a camera (eg, one on an iPhone) to detect an infrared signal and interpret the data. As the application describes, one possible use of this technology could be to disable still photography and video recording.

It reads: "For example, an infrared emitter can be located in areas where picture or video capture is prohibited, and the emitter can generate infrared signals with encoded data that includes commands to disable the recording functions of devices. An electronic device can then receive the infrared signals, decode the data and temporarily disable the device's recording function based on the command."

The technology could also have less punitive applications - it could be used to show you information about an object in a museum that you're photographing, for example.

The patent has now been granted, so this may or may not be a 'feature' that we see in future iPhones. Many gig goers and artists would undoubtedly welcome it, but others may object to its use, which could have commercial implications for Apple and drive customers towards hardware from other manufacturers.