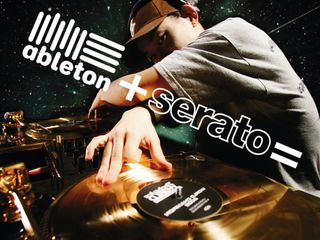 We might soon see a product that has Ableton and Serato branding on it.

Individually, Ableton and Serato both make products that are used by DJs, and now it looks like they could be making some together.

Ableton, of course, is famous for its Live software, which is used not just by DJs, but also by remixers, producers and muscians. Serato, meanwhile, is best known for its Scratch Live system, which enables DJs to mix and scratch digital music files in a vinyl-like manner.

This being the case, our best guess at this stage is that the two companies' technologies will be combined to produce a DJing system that utilises the best elements of both products.

Commenting on the new partnership, Ableton CEO Gerhard Behles said: "Ableton and Serato take different approaches to modern musical performance but both companies live by the philosophy that software should be straightforward, easy to use, and most importantly, reliable and stable onstage and in the studio.

"Ableton has never had an answer for the DJ who wants vinyl control, and rather than trying to emulate what Serato does so well, we simply want to make sure that our products work well together."

Serato Audio Research CEO Steve West continued by saying. "After years of talking together, we're thrilled to be working with Ableton. It's exciting to think about what we can offer to DJs and producers: the ability to go beyond just spinning records and add a personal stamp to the music they play."

What hasn't been revealed is when we can expect to see the first results of the new partnership. However, Serato tells us that it'll have a video on its site early next week that will explain more.

Interestingly, the announcement comes just a day after Native Instruments launched Pro versions of Traktor and Traktor Scratch - coincidence, or something more sinister?