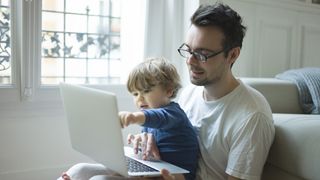 "That's it son - just drop a kick on every beat and you're almost there!" (Image credit: PhotoAlto/REX/Shutterstock)

The world of music composition and production can be difficult for newcomers, and this can be especially true for if you're attempting to cut your teeth on a more advanced genre such as DnB or psytrance.

Thankfully for all you musical noobs there are plenty of simpler styles that even the most technophobic and lazy can master in as little as a few hours. Sure, you could spend years learning your craft before you release anything into the world, but where's the fun in that?

To help you out at the beginning of your musical odyssey, we've compiled this list of novice-friendly genres that even those with the most limited of abilities should be able to crack, so let's get stuck in!

This quasi-genre is ideal for beginners because you can essentially get away with playing one chord for minutes at a time. If you've got Omnisphere 2 you can just change presets and you've got a whole new song! You might be tempted to add a melody of some kind, but please don't: the whole point of soundtrack is to engage the listener as minimally as possible.

As easy as it is to churn out, be careful not to fill your SoundCloud page up with just soundtrack stuff, though - this is a dead giveaway that you're not really a proper musician or producer. Once you've saved up enough money to buy an orchestral library or two then feel free to go full-on Lord Of The Rings - and while that might take a modicum of musical ability, there's no need for actual creativity, so try to keep it as derivative as possible.

Just whack a kick on every beat, a clap on every second kick and stick some hats between them. Anything else on top of that (eg, an untaxing one-note bassline or swung 16th-note hats) is really just a bonus. In fact, the more elements you add the less credible your track will be overall, so try to keep it as chill on the creativity front as you possibly can.

Arrangement-wise, you can just take the kick out occasionally, so when it comes back in the crowd will go crackers! Again, try not to over-egg it, and don't worry too much about mastering, either: with only about three things in the mix you should be able to clip the living snot out of the master and get the banging mixdown of your dreams in seconds!

If you thought making house was undemanding, set your DJM's phaser to stunned: techno makes house look positively baroque. Once you've got your four-four kick laid down just jam out with a little spin delay and reverb and you'll be on your way to headlining Berlin's most extensively coiffured parties!

The only time you need to add anything else is when you've got an expensive new analogue synth to show off. You don't want those blorps and bloops to sound too clean, though, so try rubbing the connectors on your 1/4-inch jack cables under your armpits for a minute or two before plugging them in to get that authentically sweaty warehouse vibe. Just for goodness' sake don't attempt to write melodic techno: it takes far more work and is far too musical for the sweaty raver hordes anyway.

This is the ideal genre for newbies because it's all about nicking whatever comes to hand, whether that's sampling bits and bobs from your uncle's record collection or simply using the first Apple Loop you can lay your hands on in GarageBand. Just go with it!

Whack a bitcrusher with an E-MU SP-1200 preset on it for that classic old skool sound, or go mental with the Nexus presets for that delightfully homogenous contemporary feel.

Remember this is 2016, son, so if you're going to go the whole hog and add lyrics, keep it basic: try not to develop your lyrical flow too much and mumble and slur as much as you can. That way listeners can use their imagination to try and work out what you're saying; because, of course, imagination is the greatest aphrodisiac of them all.

This is really the ultimate for musicians with absolutely no musical or technical knowledge, or even the desire to create something that someone aside from themselves might find intellectually or viscerally stimulating.

The great part is that you don't even really need any instruments or anything tedious that like - simply record the bath running or an insect buzzing around behind your curtains and then pitch it down a few octaves. Blam the resulting audio sludge through a reverb and you've got yourself the foundation of a hugely self-indulgent five-hour album.

If things are sounding a bit too hi-fi, simply low-pass filter everything and all those characterful harmonics will be smothered into oblivion, along with your listeners' higher cognitive functions. Take care with your harmonics to avoid any semblance of harmony - anything approaching a third or fifth is practically a millennial whoop to your target audience so steer well clear.