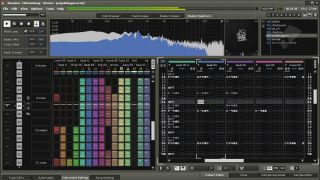 For many, the classic late '80s/early '90s computer music setup would be one based around an Atari ST, but a thick wallet was needed for extra outboard gear like a MIDI keyboard, a synthesiser and possibly even an Akai sampler for good measure.

However, at the very same time, an underground computer music movement was already brewing, and its only requirement to create kickass tunes was a humble Amiga - no external gear necessary!

Composing music that played back purely on a home computer was once the domain of videogame musicians who also happened to be skilled programmers, but all this changed thanks to a German musician/coder named Karsten Obarski with his release of the first commercially available tracker.

The Ultimate Soundtracker - or simply Soundtracker, as it was known - revolved around four vertical tracks with music programmed as rows of alphanumeric characters.

It lacked appeal for traditional musicians when compared to software with notes shown on much more traditional staves such as Aegis Sonix or EA's Deluxe Music Construction Set, but it quickly became the tool of choice for both game and demoscene musicians.

Since then, trackers have graced almost every platform from 8-bit machines and handheld consoles such as the Nintendo DS right through to the advanced powerhouses we see on modern desktops and mobiles today.

Some are platform-specific, and some serve a specialised purpose. Renoise is often recommended for its sheer DAW-rivalling power and plugin support, although many also go for Psycle, Buzz and OpenMPT.

For something a little more esoteric and hip, you might plump for SunVox or a chip tracker like Hivelytracker or Musetracker. If you're interested in getting involved in the demoscene, you need to check out Milkytracker or Protrekkr.

Despite the sheer diversity of trackers, the skills you learn on one are largely transferable, and even better than that, most of them are free!

Here are twelve tips and tricks to help you get your head around trackers.

Patterns are the mainstays of all trackers, whether they're called up numerically as in MilkyTracker or placed along a timeline as in SunVox. And they're there for using and re-using, so if you want to repeat a chunk of music without copying and pasting, just refer to the same pattern again in the timeline rather than doubling up on your note data.

The need for speed

Old school trackers use a very coarse speed system based on 'ticks' - hidden subdivisions of a row - rather than BPM. The song tempo was instead specified as 'speed' given as a number of ticks, e.g. speed 6 would make each row last for 6 ticks' worth of time, while 7 would be slower, with each row lasting 7 ticks. In order to get a speed of 5.5, you would have to set the speed to 6 and then 5 alternately every line.

While this is no longer necessary with BPM-based settings, this technique of alternating the tempo/speed has another use: you can use it as an easy and effective way to create a swing beat. Try ratios such as 8 and 4 for more pronounced swing.

In our walkthroughs, we've taken a look at a few tracker effects such as volume control, portamento and tempo, which are always entered into the command/effects columns. It's crucial to get familiar with the complete effects command list for your chosen tracker.

For starters, there is no standard for the numbers used, e.g. while most trackers use 3xx for portamento/glide, ImpulseTracker uses Gxx. Some trackers also have unusual and unique effects commands, such as for controlling the sound chip in a chip tracker.

Song fade-outs can be achieved by a command called Global Volume Slide. In Milkytracker, the command used is Hxy, where x is the rate at which to increase volume, and y the same for decreasing. You can also use Gxx to set the Global Volume. Quickly alternating high and low values in this way is called a volume strobe.

With the advent of second generation trackers like FastTracker 2, it was no longer necessary to use tracker effects commands to fake your instrument's volume envelope. Using the Instrument Editor in most trackers, you can very easily set up the values for amplitude attack, decay, sustain and release using envelopes and loop points. Panning can also be set in the same way.

In some of the more modern trackers, you can assign multiple samples per instrument and use them across key groups, allowing the creation of anything from a drum kit to an instrument that requires different samples at certain pitches. Renoise also has the ability to trigger alternative samples based on a note's velocity.

Off with your notes!

Like MIDI, notes will play indefinitely if they're not instructed to end. Most trackers record this information automatically if you play your music in live. If you're using manual note entry, you can enter a note-off command with a keyboard shortcut - usually Caps Lock.

Don't underestimate the power of your tracker's built-in sample editor! As well as the ability to perform basic tasks like fading, reversing and setting loop points, more powerful trackers even include beat-slicing.

Four channels used to be the most you'd get out of a tracker, and while working like this helps your tracking chops, modern trackers let you add far more. Renoise also includes the ability to have up to 12 note columns per channel, and other trackers allow simultaneous playback of multiple patterns.

You're not just stuck with samples! If you're coming from a DAW where you use a lot of plugin instruments, you'll be pleased to hear that many trackers - including OpenMPT, Renoise and Psycle - support VST as well as hosting their own DSP effects and synths.

While it's possible to automate instrument, effect and song parameters using Pattern Effect commands, some trackers, namely Renoise and SunVox, also include a visual method that's more similar to DAW-style automation lines, bypassing the need to program commands in line by line.

Tracker song files are known as modules, and those saved in SunVox, for example, can be very small in filesize. There are some trackers aimed specifically at creating music for small-sized intros, demos or games. Protrekkr, the successor to Arguru's NoiseTrekker, is one such project, which combines in-built soft synths with sample playback to produce ultra-tiny modules.