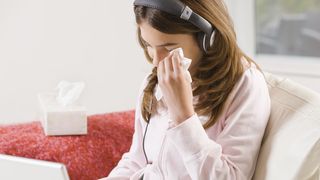 Producing can be a supremely creative and fulfilling endeavour, but if you've been making electronic music for any length of time, you'll already have a good idea of the various ways it can be a drag, as chronicled in our 10 worst things about being an electronic music producer.

Sadly, that's by no means the whole story: in addition to those obvious irritations there are a host of other more insidious ways in which being a producer can make your existence a living heck.

Check out this definitive list of the ways in which music production ravages otherwise promising and happy lives to see exactly how much joy you've unwittingly robbed yourself of...

1. You will never find anywhere to live

With ever-increasing rent and house prices, scoring a decent, affordable place to live can be a nightmare, and that's before you factor in the producer's additional requirements: a room big enough to contain all your kit that won't be an acoustic nightmare, and a location where you won't drive your neighbours into a psychopathic rage with your endless kick drum and bassline balancing.

So, without a career change to a less ethical field (arms, drugs, financial services, charity mugging etc) you're probably going to end up living somewhere less than desirable, and when gentrification eventually catches up with your penurious ass, the whole sorry cycle begins anew.

You've allocated the majority of your income to renting somewhere to serve as a suitable studio/living quarters, but no worries: the great thing about making electronic music is that it's so cheap. All you need is a laptop!

Of course, you don't want to have to deal with Windows 10, so you'd better get a MacBook, or better yet a MacBook Pro so you've got some serious processor power. Obviously, you'll need a pair of monitors, a sub, some decent headphones and an audio interface to run them all from, plus a DAW, an effects bundle or two, a couple of instruments, some sample libraries and a teeny bit of acoustic treatment.

So maybe it's not that cheap an endeavour, but as long as you don't leave the house and only eat every third day you can live like a king!

3. It ruins going out

Every cloud has a silver lining, and not having money to go out is actually a blessing in disguise, as hearing music in a club or bar can be a woeful experience once you've become accustomed to actually listening to it.

Many venues have terrible sound systems that turn otherwise enjoyable music into a piercing cacophony or an indistinct, muddy mess, and what's more, if you're accustomed to DJing yourself, you'll more than likely take exception to the tune selection, too.

The solution? Never leave the house, and perhaps watch the occasional Boiler Room set if you're feeling brave.

4. You become an introvert

Not leaving the house won't seem like a chore once you've invested a few months/years learning the ropes: if you spend 12 hours a day adjusting automation curves in Ableton Live, it's pretty natural to start dreading any kind of social engagement and to obsess over the minutiae of absolutely everything - from text message interactions to the increasingly satanic-looking arrangement of the water marks on your garrett's wall.

No matter: at least you can rely on your buds to help you fight the creeping insanity, can't you? Perhaps, but there's a significant likelihood that...

5. Your friends and collaborators are morons

Production is a delicate balance of artistry and technicality, so to excel as an electronic musician you need the soul of a poet and mind of an engineer.

Sadly electronic music scenes tend to attract individuals that are less interested in its spiritually and mentally edifying themselves than they are posing on social media and working out which haircut fits best with the sub-genre of tech-house they're into.

Interact with electronic music people in real life at your peril, and maybe join a book club to provide some emergency intellectual stimulation instead.

Pro tip: if you find someone you can collaborate with without feeling the urge to repeatedly punch them in the face, marry them immediately.

6. You'll never listen to music in the same way again

If you've made the effort to learn production, chances are you quite enjoy listening to music other people have made. Unfortunately after spending the requisite 10,000 hours of making trap bangers, you'll find yourself unconsciously analysing everyone else's music in terms of its composition, arrangement, mix, sound design and mastering.

All this additional, strenuous mental activity might go some way to explain why you haven't had an emotional response to music (or indeed at all) since 2007, but at least being dead inside means that you're able to enjoy ultra-dank memes that normies find utterly inexplicable.

Unless your parents were ravers (which probably means you were born addicted to MDMA - commiserations), they're unlikely to be impressed when DJ Hype drops your latest jump-up banger at Innovation In The Sun, and would rather you had spent your student years studying towards becoming an estate agent rather than learning how to make scary robot pig noises with Serum.

Short of getting DJ Hype to adopt you (we've looked into it, and it would be problematic), you're going to have to get a proper job and spawn a new generation of your family before your parents' eye-rolling levels subside to acceptable levels. Ain't nobody got time for that!

8. Your partner will lose all respect for you

Think about it: how can you take someone who spends 90% of their free time in a dark room auditioning Sylenth1 presets seriously? You can't, because electronic music and everything involved in its creation is inherently ridiculous.

9. It will make your job intolerable

Your job is relatively bearable - for instance, it might involve sitting in your pants writing snarky lists for the internet and sighing - but unless you are cuddlability QA at a puppy factory, it's unlikely to be anywhere near as fun as making beats.

So, you spend your days staring out of the window, imagining innovative parallel processing techniques and exciting new arrangements, and a small part of you dies every time you have to open a shared cloud document.

You could quit, but bearing in mind you've barely got enough money for your weekly block of ramen, that might not be a great look.

10. It highlights the futility of human existence

Now, before you get all upset, we are in no way suggesting that electronic music production is directly responsible for the ephemeral nature of our lives and the ultimate bleak fate of the universe as dictated by the laws of entropy. However, we will say that it doesn't do anything to help matters.

You could make the best, trillest beat in the history of big room trap, and in a few short years it'll be just as if you'd not bothered, and instead spent all day every day watching wombat gifs and eating bag after bag of mass-produced cakes. Happy producing!