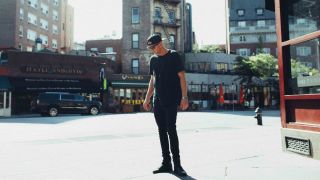 Producer Kevin Chapman - AKA SNBRN - rose to prominence when Nate Dogg’s estate gave him permission to use an unreleased acapella in his track Gangsta Walk, which has gone on to achieve more than 25 million streams on Spotify.

More success followed with Raindrops and Beat The Sunrise, both of which racked up some serious stream numbers, and there was also a notable remix of Marvin Gaye’s Sexual Healing.

SNBRN’s next party-starting anthem is Lovin’ Me, which is taken from new EP U Want It. With his signature upbeat house sound once again in evidence, we asked him to ponder the five most important lessons he’s learned about music production.

“Making my mixes big and wide has been a goal since I started producing. Adding a 5-12ms delay to one side of the channel can create an awesome widening effect. It can easily be done with Simple Delay in Ableton. But be careful what you use this on, as phasing will be implemented.

“This trick tends to work best on high frequency material like hats and percussion. Also, you can use using Brainworx Control to make sure the low frequencies are mono.”

“A must! We all use it but what’s the most effective method? I like to use a compressor and ghost kick (short snare as trigger) but both Kickstart and LFO Tool to draw out low-end stuff. Using a combination of all these three and using different times gives your track a more natural pump.”

“I’ve always gone above and beyond to make my mixes feel, well… real. To get drums and percussive stuff sounding natural I actually play it in! It’s crazy how much different velocities of an instrument change the feel. Using a velocity-sensitive controller you can capture a real performance. I love my Maschine! I like to make little loops and drag them out as audio; saves a ton of CPU.”

“This is key to getting your mixes sounding fat and loud! Adding subtle saturation throughout the whole mix really gets everything slamming before you hit the mastering chain. I use a combination of Ableton Saturator, CamelCrusher (free plugin) and Sound Toys Decapitator.”

“This applies to everything you are inspired by - record it or write it down. I have tablets all through my house like a mad man. I also use a whiteboard religiously to organize my ideas. I tend to hum and record vocals or melodies directly into my iPhone using Voice Memos. You have to capture that moment because once it’s gone it’s gone.”