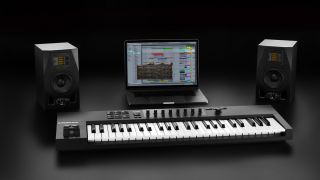 NI’s line of ‘smart’ MIDI keyboards is getting significantly expanded.

The existing S-Series gets a new addition, the S88, which takes all of last year’s version 2 updates - including quality screens and touch-sensitive controllers - and places them in a full-sized 88-keyboard with fully weighted, hammer-action Fatar keybed. It'll retail for $999/£799/€999 when it's released on 27 September.

Find out more about all the new products on the Native Instruments website.