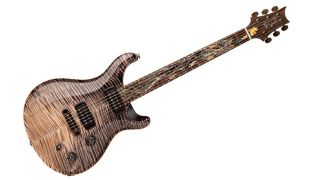 NAMM 2020: A snip at around £15,000, it may be very unlikely to be touched by the likes of me and you, but let's take a moment to gaze in wonder/horror at PRS's latest luxury addition to its ultra-high-end Private Stock collection.

A total of 135 of the Anniversary Dragons will emerge from the PRS factory, in order to celebrate the company's 35th year in business.

The fantastical dragon inlay, courtesy of Jeff Easley, a fantasy artist famous for some of the Dungeons & Dragons rulebook covers, is centre stage here.

Back in the real world, the guitar is based on the PRS McCarty model, with a thicker back, PRS Stoptail bridge, and a classic volume, push/ pull tone control, and 3-way toggle electronics layout, but with TCI model pickups from the Paul’s Guitar and tweaked Phase III Locking tuners.

Paul Reed Smith himself says, "When I was a teenager, I had a dream about a guitar with a dragon inlaid down the neck, and in 1992, I was able to realize that dream for the first time.

"It has become an important part of our history to celebrate the technology that allows us to create these intricate inlays and the idea that dreams can become reality. I really like this new 35th Anniversary Dragon.”