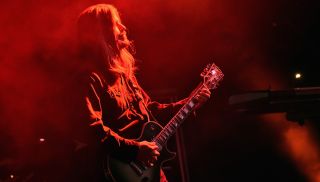 NAMM 2020: In some fairly unsurprising news after he pretty much confirmed it on Instagram last year, Gibson has finally confirmed it will release a Les Paul Custom Silverburst signature for Tool's Adam Jones.

In a new press release detailing its major launches for the coming year, the guitar giant at last confirmed it was on its way:

"The Gibson Custom Shop is also working with legendary and multi-talented Tool guitarist artist, sculptor, special effects designer, videographer and producer Adam Jones on recreating his original 1979 Les Paul Custom Silverburst that can been seen live on stage with Adam today in support of their world tour and blockbuster new album Fear Inoculum. More details to come on this project later in 2020."

So the bad news is that unlike Tony Iommi's new Custom Shop SG signature model the finished Silverburst examples won't be ready for Winter NAMM. Jones has already confirmed something was in the works with Gibson last year but this is the first time the company has confirmed it and offered a timeline.

Though we've seen Silverburst Customs in the hands of players like Mastodon's Bill Killiher, Jones is the model's most dedicated evangelist. As he explained to our friends on Guitar World last year…

"I remember buying my first one and the guitar salesman really tried to talk me out of it," reflected Jones. "It was the early '90s on the Sunset Strip and it was like Guitars R Us or one of those shops where all the guys running it were very pretty, had hair-sprayed hair and jeans tucked into their cowboy boots.

"I have a true love for that color and that guitar in general, and I believe that particular metallic paint does something to the tone or the resonance or the polarity somehow."

And he's got the Silverbursts to prove it too…

"Right now I have six actual vintage Silverburst Gibson Les Paul Customs and I have some others that people have given me that have been painted silverburst. I bought a couple extra because I used to only bring two guitars on the road, but now we use drop B for Prison Sex and then we tune the guitar down to drop C for The Pot, which is a little easier for Maynard to sing and he can really let go every time."

As Jones goes on to to explain, he modifies his Silverbursts with specific pickups and frets, that he has to hunt down on the used market. We're assuming the Custom Shop has had to try and recreate them…

"I use the thickest frets possible because I pull off a lot and I also like to use kind of a sitar technique where if you push down really hard," Jones explained to Guitar World. "The note will go sharp, and the big frets make that work.

"I still use just the original Seymour Duncan Super Distortion pickups. I buy those up whenever I see an old one from the '90s."