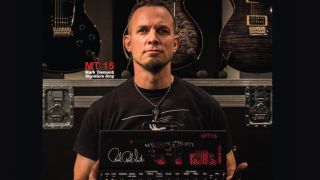 NAMM 2018: PRS and Mark Tremonti have revealed the second fruit of a relationship which has already seen the launch of the lauded PRS SE Mark Tremonti guitar.

The MT 15 - the Alter Bridge and Creed hero's first signature amp - is a 'commanding' two channel lunchbox powered by 6L6 tubes, designed very much with heavier players in mind - though PRS are adamant it has a lot to offer players of all genres.

“We knew we wanted a low-wattage amp," says Tremonti. "The challenge was getting a lot of tone and features in a little box. We’re all blown away with how it turned out. It’s going to be great for someone to take it out of the box, set everything to noon, and have it sound great.”

Back in 2016, Mark revealed to us that a prototype of his signature actually formed the basis for his tone on Alter Bridge’s most recent album, The Last Hero.

“Elvis [Baskette, producer] told me about 70 per cent of what he was mixing [was the signature amp]. And I was really glad to hear it because I’ve been going over this amp for a while now and I was really excited to hear what he had to say about it because I remember I brought in the Archon for the previous solo album stuff and he really liked that amp.

"We mixed that up with the [Cornford] RK100s, [Bogner] Uberschalls and the [Mesa] Boogie. But on this record he said I was mainly using that signature amp and he absolutely loved it. It’s a little 15-watt amp but in the studio you’d never know because it’s mic’d up.”

“The Archon was the reason I was open minded about doing a PRS amp because all the previous PRS amps weren’t in the same ballpark of what I was used to playing on. I loved all the amps they were developing but they were either more for Nashville style or country players to use, not necessarily a hard rock or metal player.

"Once I heard the Archon I was blown away. In thought it was such a great sound, such a different sound from what they were doing. And I loved it at the time. It reminded me a lot of the Bogner Uberschall so that’s when I went to them, but I’d never wanted to do a signature amp [before] because I’m not a one amp guy, I never will be and I never have been.

“But one day I was online and looking up amps and found ‘top-selling amps’ and they were all these little 10-watt amps.

"The lightbulb went on and I thought, why don’t I do a signature low wattage amp for an affordable price? A bedroom amp. That way if my tastes change over the years and I’m using different amps live I’ll always have signature amp that’s more of a studio and home amplifier.

"So we started developing it and once we started voicing it differently we compared the Archon to the signature amp and I love it so much more than the Archon now. It’s very exciting but one thing I didn’t expect to happen with this amp was the clean channel, it’s one of my favourite clean channels of all my amps."

We're chasing PRS for a confirmed release date and price, but it's looking like a rather tidy $649. For more info, see www.prsguitars.com.