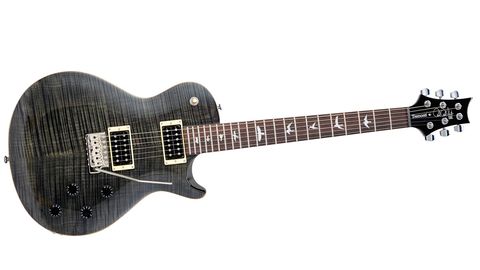 A solid instrument that is not only a serious 'student' guitar also has plenty of appeal for the more seasoned player who is on a budget.

While PRS Guitars is coming  to the end of its 31st year of producing industry-defining, top-notch production guitars, the SE ('Student Edition') range is only half that age, originally appearing after much deliberation in 2001.

Now, with 2017 around the corner, PRS has done a bit of a refresh with, for  the first time, a Paul Reed Smith signature headstock logo over a vastly reduced SE motif, and various updates that make them, on paper at least, better than ever.

The third main PRS shape landed PRS  in a whole lotta trouble back in the early Noughties, and while it's always been an artist favourite, the Singlecut has ebbed and flowed in the USA Core line and has actually been more visible at this SE level. That said, before this reshuffle, there were five Singlecut models in both lines, and from the initial raft of new SE models that drops to three: the 245, the Zach Myers and this Tremonti model.

It's an all-round bigger depthed and weightier piece, but that's the point - certainly for artists like Mark Tremonti.  Its single-cut with vibrato mix remains pretty unique (there's no Stoptail option here, unlike the USA model), and like the other models here, we get a pickup change from those 245 humbuckers of the previous model to the SE Tremonti pair fitted here: you got it, Korean-made versions of Mark T's USA-made signature pickups.

The toggle-switch is Les Paul-style on the upper shoulder, although the four-control layout is different to the classic Gibson drive: the two controls closest to the bridge are the pickup volumes (the neck pickup volume is the highest); the outer two controls are the tones. Like the recently-released Santana, there are no coil-splits, but, again, the humbuckers are four-conductor if you want to get out that soldering iron.

The Tremonti is not only noticeably heavier, but thicker, too, at just under 57mm - pretty much the same girth as the USA model. Earlier SE Singlecuts were a lot thinner. Compare that with the recently-reviewed Custom, which measures just under 49mm, and  the aforementioned Santana, which is just under 47mm in depth. So, while the maple caps are pretty similar in thickness (on average 13.7mm), the Tremonti's additional depth comes from the extra approximately 9mm of its mahogany back.

The Tremonti might be the weightiest, but having used an early Singlecut of similar weight for years, it does feel  like home to us. It's very centred  on the strap, less feline than the Custom, and there's more than a hint of extra sonic depth, even before we plug in.

The Tremonti has arguably the most Gibson-esque voice, certainly in the neck position where the extra lows created by the construction bring in a quite familiar sound that's at once bluesy and jazzy  and - surprisingly perhaps - old-school: 'classic' might be a better world. Kick in the bridge, however, and prepare to rock!

It's a powerhouse that, like the Santana, has plenty of midrange poke - it loves gain but still retains a bite. Of course, a single-cut with vibrato isn't an everyday piece and while, for some, it's like putting jam on  your porridge instead of salt, it's a crackin' combination that adds subtle shimmer to the pushy pickup mixes, especially with delays and reverbs to the fore, or can be used for more gymnastic techniques.

Unlike the other two previously cited guitars from the PRS SE stable, we also have a back route, so the vibrato upbend range is increased with just a shade under a full tone upbend on the top E and pretty much down to slack, certainly on the lower strings. The upbend on the Custom is closer to a semi-tone on the top E and around a tone on  the G, whereas the Tremonti can take that string up nearly a major 3rd. We have to say, though, with minimal string stretching, this is a very in-tune system.

With more low-end, the Tremonti really can sound huge and the bridge pickup is well voiced to send the mildest of amps into overdrive. But it has a duality that lies in its much more vintage-y neck humbucker: with a little shimmer from the vibrato, it can sound extremely retro and less rock. Yes, our sample was a little overweight, but with such a strong voice, that perceived 'minus' actually seems to add to the powerful delivery.