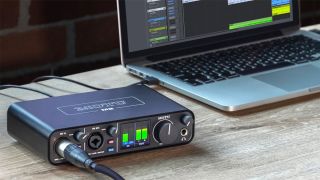 MOTU has long been a major player in the high-end audio interface market, but with the M2 and M4, it’s offering two models that are much more affordable.

These 2-in/2-out and 4-in/4-out devices promise best-in-class performance. This starts with the sound quality; the ESS Sabre32 Ultra DAC Technology is said to be the same as that which is featured in top-dollar interfaces, and helps to deliver 120dB dynamic range on the main outputs and a high-quality headphone output. The preamp circuits, meanwhile, are said to facilitate -129dBu EIN on the mic inputs.

Speed is also of the essence, of course, and the M2 and M4 promise ultra-low latency (a round-trip figure of 2.5ms is quoted). Metering is via a full-colour LCD display, which is impressive at this price point.

There’s also a Loopback feature that enables you to combine computer audio with live inputs for streaming direct to YouTube or your podcasting platform of choice.

Both interfaces give you two mic/line/hi-Z guitar inputs on combo jacks, with individual preamp gain and 48V phantom power for each of them. The M4 also adds two balanced 1/4-inch line inputs, and all inputs offer direct hardware monitoring.

There are balanced 1/4-inch and mirrored unbalanced RCA outputs on both interfaces, and MIDI I/O is here, too. Sample rates ranging from 44.1 to 192kHz are supported.

The interfaces are bus-powered over USB-C, and also offer iOS compatibility. Their metal construction, meanwhile, should ensure that they’re built to last.

The M2 and M4 are available now priced at $170 and $220 respectively. There’s plenty of competition at this price point, but with their strong pedigree and impressive specs, we wouldn’t bet against these interfaces succeeding.