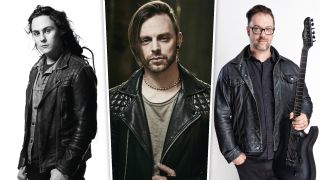 Bullet For My Valentine guitar hero Matt Tuck, YouTube sensation and Chapman Guitars mastermind Rob Chapman and classic rock maestro Chris Buck - who was voted Best New Guitarist of 2017 by the readers of MusicRadar - will join forces to crown the 2018 Young Guitarist of the Year.

Young Guitarist of the Year

How to enter and how to win

We've had some notable winners in the past. Alongside past Guitarist of the Year winners including Guthrie Govan (The Aristocrats, Steven Wilson, Hans Zimmer) and Dave Kilminster (David Gilmour, Steven Wilson), teen prodigy James Bell earned the Young Guitarist of the Year title back in 2011. This year’s competition could uncover the guitar heroes of the future - and that could be you!

Finalists will be selected by our panel of star judges and industry experts, with the finals taking place live on stage at the UK Guitar Show in London on 29 September, tying in perfectly with World Guitar Day 2018!

In addition to the prestigious title, winners will walk away with an exclusive prize haul from the biggest names in guitar.

Entering the competition is easy: simply upload a video of your playing to YouTube and fill out the form below.

The Guitarist of the Year team and judges also want to know about the person behind the playing; tell us where you're from, what drew you to the guitar, what styles you favour, the gear you use, and anything else that could make you stand out.

Our judges will be revealing their tips for success in the run-up to the show, but in the meantime, head over to our guide on how to enter and how to win.