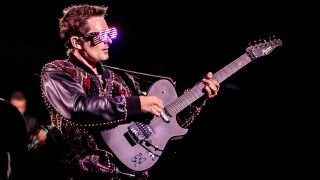 All guitarists love the gear they play, but it takes an extra-special connection with your choice of guitar to become heavily invested in the company that makes them.

That’s exactly what Muse’s Matt Bellamy did when he had a ‘Remington moment’ in 2019, becoming the majority shareholder in Manson Guitar Works – the brand that evolved from famed UK luthier Hugh Manson’s custom-built models into an internationally recognised innovator of guitar design.

Of course, it’s fair to say that Bellamy’s association with the company has had a big part to play in spreading the Manson name across the globe. And his latest META Series MBM-1 model with Mansons Guitar Works and Cort is being released soon.

The Muse frontman has been fiercely loyal to the brand for the last 20 years, rarely spotted cradling any other guitar, and his non-traditional requests of effects, MIDI controllers, lasers and unorthodox paint-jobs for his instruments have helped propel the brand’s reputation as the company where ‘anything goes’ when it comes to guitar design.

“It really all started from Hugh retiring. It sort of stemmed from that really, him retiring and passing it on to me to keep it going” Matt tells MusicRadar of his decision to invest in his favourite guitar company.

"It’s run by Adrian [Ashton, Manson’s MD] and there’s about four or five employees there. It was good timing too because at the time the band was finishing a tour last year and it seemed like a good time to put some focus into this. It’s close to my heart because it’s a small company based in Devon, where I’m from. The factory is just down the road from where I went to school. So it’s nice to be part of a small business in Devon, that’s my homeland. So yeah, it just seemed like I was the right guy to take over."

With the contracts signed and business cards printed, we’re keen to find out exactly what the future holds for Manson’s Guitar Works under the direction of Matt Bellamy.

So, during a brief conversation with one of the 21st Century’s most innovative guitar heroes, here are five things we learnt from the rock start-turned-company-owner.

1. It's not about about effects

Mention Manson’s guitars to the casual observer and you’ll most likely start a conversation about some of the ambitious inclusions in Matt Bellamy’s guitars. But for the Muse man, there’s more to the brand than that.

“I have lots of ideas about how to try and develop the company further: expanding it with other guitar lines. Different styles of guitars, maybe even other signature models and that kind of stuff. I always felt the company has been aimed towards metal and hard rock, so I’d like to expand the range to encompass vintage-style guitars, classic-style as well as modern guitars.”

2. But it's still about effects too…

Best guitar effects pedals 2020: our pick of effects in every pedal category

Why throw the baby out with the digital bath water? While Matt and the team might have plans to raise Manson’s game when it comes to tradition, he also has his sights set on bringing tech-loaded guitars to the masses.

"The main thing I’m focussing on right now is - my favourite effect to have built-into a guitar is the Whammy pedal. I have all the components of that built into the guitar itself, and then I also have the Kaoss Pad as well. So essentially instead of having the whammy bar, I’ve got the X/Y controller and I can set it to anything from a divebomb to just going up or down a tone, or entire octaves.

"So at the moment that’s very expensive, it’s a custom job. You have to dismantle all the components and stuff like that. But we’re hoping to do a collaboration with DigiTech where we can maybe launch a guitar that has that built-in.

"There’s loads of stuff you can put in there. Up until now we’ve had had the XY pad as a MIDI controller, and obviously you can control anything with MIDI with that. But some people buy the guitar thinking that they can just get effects straight out of the box, they don’t realise that you actually have to plug it into something like a synth or effects unit.

"That’s what I have on stage, but we’re yet to get to the point where that’s even remotely affordable. It’s like a £10,000 guitar, so I’d rather do more research where we can find a way to bring the cost of the components down. It’ll never be a 500-dollar guitar, but we might be able to get it down towards the 2000 range.”

Given Matt Bellamy’s love of some of the most esoteric effects of the last 20 years, it’s no surprise that a range of pedals could be on the horizon.

“We’re starting to talk about getting into effects pedals as well, so we might be developing some," he reveals. "It’s a bit early to say what they’re going to be because it’s just research and development at the moment. It could be next year or something.

"I’d like to do a combination of both [traditional and modern effects]. I think I’d do a couple of fuzzes, but fuzz sounds that are a bit more unique and unusual, and specifically recreating some of the sounds I use in the studio.

17 tips, techniques and tricks to master the Muse frontman's playing

"I’d like to create an effects box that does one of my standard sounds in the studio, which is basically the crunch and bite of a Vox amp, but also with the high saturation of a Diezel amp, like a metal sound.

"So those two things with a blend control - the weight of a metal sound with a Vox. I’d like to do a pedal that does that, and then get experimental, but probably just start off with one or two really interesting fuzz options.”

4. Muse fans are in for a treat

Two decades after he first ordered a custom Manson guitar, Matt is aiming to celebrate with some collectors’ edition models based on at least one of his favourite signature models. As expected, there’s no compromise on the details, either.

“We might also start doing a really high-end, precise exact replica of one of my first Manson Guitars that I had made," Matt tells us. "There’s two guitars that I regard as the two most special guitars that I’ve had, and they were made around about 20 years ago. It was around the time that Origin Of Symmetry came out and I first had enough money to have my own custom guitar.

"So we’re thinking this year or next year to do a limited edition replica as a celebration. It would be exact - I’m talking sourcing the electronics from that period to go into the guitar, and all the mouldings and stuff so you wouldn’t be able to tell the difference between that one and my one.

"We might put together an experience where people could come down to the factory, see how things are made and meet the guys. Maybe I could be there lurking in the background or something, I don’t know!

"The two most special to me - the first one is called The Delorian. It’s one that i used on the first few tours with the band, and it has that metal, aluminium look like the Delorian from Back To The Future.

"Then the other I just used to call the Black Manson, but Hugh has another name for it, 007 or something. That was the first one to have all the electronics in. It had the proximity wah-wah, the phaser, it also had a ribbon control in it.

"I’ve used that guitar on pretty much every album that Muse has ever recorded, it’s like my go-to recording guitar. I used it on tour a lot in the early 2000s, but once I threw it across the stage and it nearly broke and I got scared and never played it again on stage. So I don’t tour with it anymore, but those are the two that we’re considering doing really high-end replicas of.”

High-end custom models are all good, if you have the readies. But Manson Guitar Works isn’t going to forget regular Joes anytime soon - starting with the Meta series.

This builds on the brand’s relationship with Cort, who they collaborated with on the Cort/Manson MBC-1. Pre-orders are currently being taken on the Meta MBM-1 Matt Bellamy signature model, which was launched earlier this year at the NAMM Show, and the guitars are due to start shipping imminently.

"The Meta series don’t always have all the electronics built-in, but I’m hoping that if our collaboration with Cort goes deeper, we might be able to get some guitars with some of the more special effects stuff built-in.

We’ve got the Manson MBM-1 coming up soon. We’ve been working with Cort - the majority of the guitars that we do are handmade in Devon, but since I’ve come on board we’ve done a deal with Cort for a higher volume of guitars at a lower price. We design them, they manufature them and send them to us then we put the electronics in, verify the guitar and then send them out.

So our Meta series is really our first foray into real low-priced guitars which are Manson-branded and everything.”

And in further Matt Bellamy, the guitarist has recently revealed to Guitar World he's bought Jeff Buckley's Telecaster – check out the full story over on GuitarWorld.com