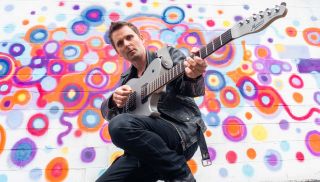 NAMM 2020: Last year Manson Guitar Works announced that none other than Muse man Matt Bellamy had taken ownership of the company. As the longterm builder of Bellamy's guitars we couldn't think of any better candidates for it, but the big question was what would happen next. Well now we know. It's a new Matt Bellamy signature model and it's launching a whole new series called Meta. It's affordable too.

The successor to 2015's acclaimed MBC-1 , the MBM-1 is again made in collaboration with Cort with all design and development work completed and personally overseen by Devon's Manson Guitar Works.

The guitar is launching the new Meta Series range, 'which seeks to introduce Manson's renowned quality and design at an affordable price point whilst retaining the shape, features and details that feature on the company’s headline products.' That sounds like great news to us.

Manson's popular Satin Black finish is now joined by a new Starlight Silver. And the MBC-1's neck single coil pickup is now replaced by a Manson-designed humbucker; the same setup as several of Bellamy's Manson customs for stage and studio.

The basswood body / satin maple neck guitar incorporates a killswitch for sonic experimentation with or without additional floor effects and fans will notice the headstock design change. The MBC-1 had the Cort logo on the front, the MBM-1 now has Bellamy’s signature together with the Manson logo. So enough about specs – how much is it?

We'll get a closer look at the MBM-1 on the show floor, but for now check out the current range at Mansonguitarworks.com