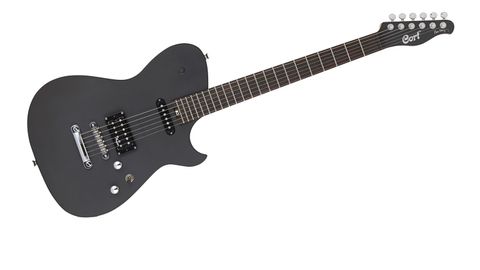 Bellamy, Manson and Cort have created one of the finest rock axes at this price. Let's hope this is just the beginning of a significant partnership.

For a guitar made for such an extraordinarily talented musician, Matt Bellamy's latest signature model is a bit, well, ordinary. Those of you expecting onboard effects and MIDI controllers to emulate the Muse man's custom Hugh Manson-made axes best look elsewhere.

At £499, the MBC-1 is designed to hit a completely different price point, and although still designed by both Matt and Hugh, it's made in Indonesia by guitar-making giant Cort.

Price aside, a quick strum lets you know this is a Manson through and through: it rings like a bell, the sort of acoustic response you'd expect from a quality guitar, but not always at this price. Game on.

In style, the MBC-1 is a pretty accurate repro of the instruments used by Matt. That big upper shoulder won't be to everyone's taste, but in playing position, it's not only lightweight (3.52kg) but with forearm and ribcage contours, it fits like a glove. And the bolt-on maple neck feels superb, too, with a deep C profile and sloping shoulders that tell your hand it's thinner in depth than it actually is.

Unusual at this price, too, is the compound radius fingerboard, which flattens out as you move up the neck; with tidy jumbo - but not over-tall - frets, it's a fast, fluid player, as well.

While the Gibson-style bridge setup is common enough, the Cort-logo'd rear-locking tuners are above average, and with staggered height posts, there's no need for string trees. It's not rocket-science, simply good guitar making.

Similarly, the Cort-made, Manson-designed pickups are intended to create "a good smattering of the sounds Matt would use," says Hugh. So, what we have is a fairly hot Alnico-powered humbucker at the bridge and a single coil at the neck. Along with a master volume, tone and three-way pickup selector, the upper shoulder also holds a kill button for stutter effects.

Most of us probably won't ascend to the stadium stages of Mr Bellamy, but if you did, you'd be well equipped with this Cort. That ringing sustain means that, plugged into a cranked Fender-like clean amp, you have a huge foundation-shaking sound. Yes, the bridge pickup has strong, thick midrange and crisp highs, but all in a good way.

The lower-output single coil can sound weedy in contrast, but through a decent valve amp with a little gain, switching from the power of the bridge humbucker to the neck pickup cleans up the front-end of your amp nicely - great for rhythm parts and dense, effected soundscapes.

The mixed position is less hollowed than many a Fender, but works well in context. While it does classic rock very well, this guitar's home is gained-amp tones, where that bridge pickup really kicks but retains a musical, organic presence - loads of fun, especially with that kill button.

There's little doubt if you have the chops, the MBC-1 will get you into a Muse tribute band. But it's far more than that. Bellamy, Manson and Cort have created one of the finest rock axes at this price. Let's hope this is just the beginning of a significant partnership.