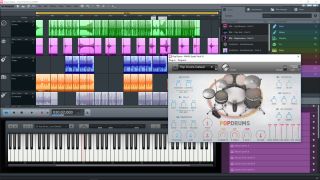 Believe it or not, Magix’s Music Maker - a beginner-friendly music production app for Windows - has now been around for 23 years, and the company says that the latest version offers “the most revolutionary feature update” since the release of that very first version.

This claim refers to the implementation of the 64-bit Hybrid Audio Engine. This comes from Magix’s Samplitude DAW, which is designed with pro users in mind. It promises better sound and improved performance, and is accompanied by multicore support. This means that all of your CPU’s cores can be used optimally, which should mean more simultaneous effects and instruments.

The standard version of Music Maker can be downloaded for free, while the Plus edition, which adds the multicore support and comes with more plugins, sounds and presets, can be yours for $59.99/£49.99/€59.99. The flagship Premium edition, meanwhile, gives you even more content, including VariVerb II and iZotope Ozone 8 Elements. This costs $129.99/£99.99/€129.99.

“Since its release in March 2017, the free version of Music Maker has been used by over 2 million new beat producers,” says Matthias Trautwein, Product Owner for Music Maker. “We’re now bringing loop-based production to a whole new level of performance. And the results can be clearly heard. There’s a huge improvement to overall sound and performance, all thanks to the new audio engine. Now, anyone can create their own songs in high quality and in no time at all, even if they don’t have any previous experience.”