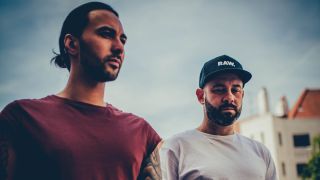 Jon Kong and Chris Adie have been operating as Leftwing & Kody since 2012, giving us a steady stream of releases and attracting the attention of some of the biggest names in house and techno. They’ve also earned a variety of residencies, presented a monthly Rinse FM show and set up their own label in the form of Lost Records.

The hard graft looks set to continue into 2018 as the duo launch their new label Lost Audio. They’re set to release a remix of Anthony Attalla’s Devo on the imprint on 15 December.

“When starting a track from scratch, it’s good to add more elements than you need; they may not make the final cut, but it’s easier to take things away than to add in our opinion. Also, when arranging, if you find that you’re getting stuck, you'll have a whole load of parts to use instead of having to try and create them.”

“We all know that it’s hard to get that creative spark and sometimes we feel like giving up, but keep at it. In an ideal world you can hit a few keys and you've got magic, but it’s not usually like that in real life. We usually hit many brick walls before that special riff comes in; it can be very frustrating getting over those walls and not letting yourself give up, so be patient - you can’t rush brilliance!”

“When we make music we often try to have a theme to the project – eg, tribal/retro/dancehall - then we will have certain folders made with parts and samples that are in keeping with that theme. It’s very easy to create the sound you’re after this way, and it saves so much time searching for sounds.”

“Music is a very up and down business, and one thing we try not to do is compare ourselves to other artists; doing this will only give you the feeling of wanting more, feeling jealous of what other artists are achieving, and, ultimately take your focus away from your own projects. Be humble and happy with your situation and be happy for your peers and you'll be a happier musician!”

5. Use a master chain

“One thing that really brought our sound up to scratch was mixing into a master chain. It could be a simple EQ, compressor and limiter, but doing this helps you achieve the desired volume/weight that you’re after. In the early days, we made so many tracks without a master on, then after a/b-ing them to stuff we were playing, ours never matched up. Even after a pro master they were still lacking, but once we started mixing into the master the penny dropped for us.”