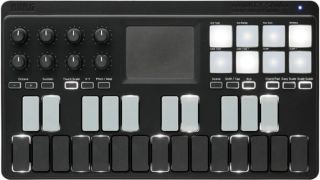 As a performing artist, I think the real testament to a product’s value for me is whether it makes it into my permanent rig. Case in point, Korg’s original nano series: I still use the nanoKey almost daily when I’m out and about with my laptop or working at home. And the nanoKontrol has been my primary controller for several years, thanks to its ability to fit comfortably into the tiniest DJ booth (and it is easily replaceable, in a pinch).

I’m also a die-hard iPad user, and as I find myself composing more frequently in iOS, I’ve been looking for a capable controller that fits neatly into my everyday backpack. So when I saw the new nanoKey Studio at NAMM earlier this year, I felt I had found my solution.

The nanoKey Studio includes 25 of the same velocity-sensitive, backlit keys as its predecessors, which is a love/hate thing, depending on your needs. But for data entry and on-the-go sequencing, they’re amazing. The new knobs have a smooth travel and, thankfully, aren’t endless encoders. The Kaoss Pad is a bit smaller than usual, but it is responsive.

The new rubberized velocity-sensitive drum pads feel wonderful, but upon first play I felt they weren’t sensitive enough. That’s when I fired up Korg’s Kontrol Editor software, where everything I needed was clearly laid out and easy to find (see Figure 1). The editor offers extensive customization of almost every interface element, including the ability to reassign CCs on the knobs and Kaoss pad, and scale their values to specific ranges. From there, I tailored the pad sensitivities to my liking, then saved that customization into one of the eight performance scenes.

In addition to its comprehensive control surface, the nanoKey Studio also includes some handy performance amenities, such as the ability to lock everything to specific keys/scales that are applied to both the keyboard and drum pads, the latter of which serves double-duty as chord trigger pads. The arpeggiator has six directions available, as well as control over octave range, latching, and tap tempo functions. To get the hang of all these features, I left the PDF manual open as I worked, because the nanoKey Studio is fairly deep for its innocuous footprint.

On the iOS side of things, I fired up Korg’s Gadget synth/sequencer, activated the nanoKey Studio’s Bluetooth MIDI and was up and running like a champ. (Tip: Bluetooth MIDI is activated within Gadget, not the iOS settings Bluetooth window, as expected.) I was astonished by the low latency: The controller felt extremely responsive.

The street price of $150 originally felt a tad steep for the nanoKey Studio, but the huge array of included software for Mac, Windows, and iOS –LE versions of synths from Korg, AAS, and Propellerhead, and a $50 discount on Ableton Live—brings the overall value up to par. Even if you already own one or two of the bundled apps, the others will quickly make up the difference, especially the Korg M1 LE and AAS’s terrific modeled instruments.

While I’ll still keep my original nanos for their size, I have a feeling that the nanoKey Studio is going to become my new workhorse when it comes to mobile production. It’s got pretty much everything I need from any controller and Bluetooth makes it perfect to use on planes and in other tight spaces. As for iPad users, this is as close to controller Nirvana as you’ll get for the foreseeable future.

Cons: While it’s generally intuitive to use, you’ll need the manual to get the hang of it.